On 25 October 2019 hundreds of Hartpury University graduates took to the stage of Gloucester Cathedral to celebrate their success.

You'll find recordings of the ceremonies below, which were live streamed on the day.

You'll see the excitement of Hartpury's graduation day online using #HartpuryGrads2019. We have shared an album of photographs from the day on our Facebook page @Hartpury

An honorary degree is one of higher education's most significant accolades. Each year, Hartpury University bestows a number of honorary degrees on distinguished individuals who merit special recognition for outstanding achievement and distinction in a field or activity consonant with the mission and strategy of the University.

The successful nominees received their degrees at the Graduation Ceremony held at Gloucester Cathedral on 24 October 2019.

Mark was a governor of Hartpury for 25 years and for 17 years of that period was Chair. During that time Hartpury developed from an institution with only 69 students and under the threat of closure, to the outstanding institution it is now. Mark was absolutely instrumental in this progress as the influential Chair of the Board of Governors.

Mark, a local farmer and businessman, is also a former governor of the University of the West of England, has held the chair of the CULTIVA (ELITE) Consortium, and was a member of the Gloucestershire Federation of Colleges. He was a local county councillor for the area including Hartpury, and was also involved in the setting up of the radio station Severn Sound.

This honorary degree is awarded in recognition of Mark’s contribution to education and Hartpury. 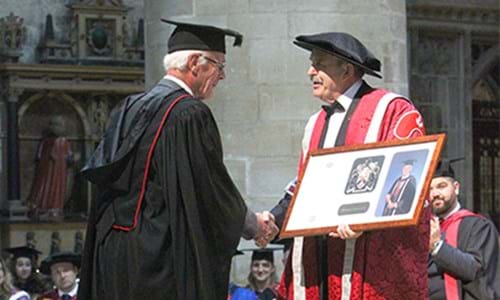 We fondly remember Martin Baber, who passed away in 2019. Martin was a former student of Hartpury and a governor for 24 years, retiring in February 2015. He was a key figure in helping to form a new Board of Governors in 1989 when Hartpury’s future was under threat. His knowledge ensured the right people were presented for election to the Board, and he nominated local businessman and farmer Mark Davison to be elected as Chair, believing him to be the best person for the job. Martin helped Hartpury to become one of the largest land-based education institutions with an outstanding reputation.

He was made President of Hartpury Rugby in 2010 and used this role to encourage higher achievement and greater participation in the sport’s activities. He was responsible for the formation of the Gloucestershire Farmers Trust and he managed to retain Agriculture House in Gloucester as a venue for farmers to meet.

This honorary degree is awarded in recognition of Martin’s contribution to education and the agriculture sector in Gloucestershire.

Jane Holderness-Roddam achieved sporting fame by winning Badminton on her horse Our Nobby in 1968. She was selected for the Olympic three-day event team and became the first British woman to compete and win a team gold medal. Her other horses included Warrior, who carried her to victory at Burghley in 1976, Team Gold at the European Championships at Burghley in 1977, and to success again at Badminton in 1978.

Following retirement from eventing, Jane remained involved as Chairman and now President of British Eventing. During her illustrious career she has judged, instructed and competed in many countries and made a significant contribution to equestrian sport and to the promotion of related education and training, including improving the welfare of horses. Many charities have benefitted from Jane’s work, including World Horse Welfare, The Brooke and Riding for the Disabled association, where she held the role of Chair for many years.

Jane was a governor at Hartpury for eight years from 2007. She was awarded a CBE for services to equestrian sport in the Queen’s Birthday Honours List in June 2004, and currently serves as Lady-in-Waiting to The Princess Royal.

This honorary degree is in recognition of Jane’s contribution to equestrian sport and to the promotion of equine-related education.

What better place to celebrate one of the most important academic achievements of a graduate’s life than in the stunning 1,300-year-old Gloucester Cathedral? The ceremony is attended by a variety of guests including parents, siblings, Hartpury staff, governors and honoured guests, who all contribute to the success of our students.