Hartpury were off-colour from the outset and Ashley Hosking opened the scoring on eight minutes with a penalty from distance.

The Reds extended their advantage to 10 points from the restart as Greg Goodfellow sniped clear on the right to create a try for Notman, converted by Hosking.

A strong carry from Reuben Haile helped the College steady the ship, as Redruth conceded a penalty that Craig Jackson slotted to open his team’s account.

Hartpury enjoyed their best spell of the match as the first quarter concluded, pinning the hosts down in their own 22 and forcing a succession of penalties.

Referee Shane Lewis eventually dispatched Notman to the sin bin, with Lewis Ludlow swiftly squeezing over for a score improved by Jackson.

But the Reds forced their way back into proceedings and, after Chris Fortey saw yellow for Hartpury, lock Luke Collins was driven over from a lineout for their second seven-pointer.

Restored to their full complement, Redruth turned the screw and boxed Hartpury into their infamous Hellfire Corner.

The 14-man visitors managed to weather the storm before stunning their hosts with a sucker punch on half time, as Ross Moriarty pounced on a loose ball and combined with Alex Woodburn to set up Ben Vellacott.

Ludlow then handed the Gloucestershire outfit the lead for the first time on 51 minutes in very similar circumstances, the number eight reacting quickest to ground a ball that had spilled out of a scrum on Redruth’s five-metre line (pictured).

As the Reds’ penalty and error count continued to rise, Woodburn appeared to have made the result safe when he touched down for the bonus-point try with just 14 minutes remaining.

But an obstruction from the kickoff allowed Hosking to slot three points, with Notman crossing five minutes later as the hosts went wide off a driving maul.

Redruth had six minutes to find a five-pointer, and Hartpury’s discipline deserted them at a vital stage as the hosts kicked their way into the corner and set the stage for captain Fuca to strike.

Hartpury would like to thank Redruth for their excellent hospitality and look forward to the return fixture in March.

Hartpury’s next match is at home to Canterbury on Saturday 30th November. 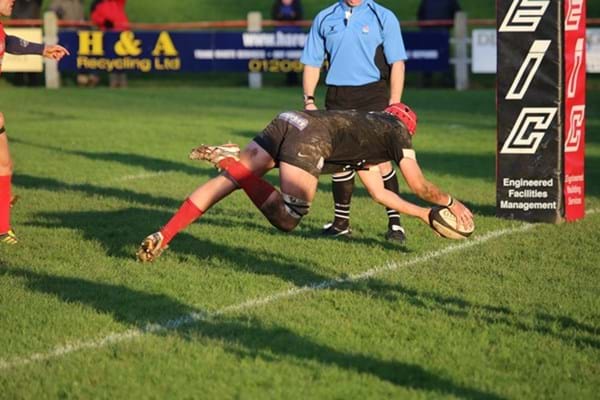