Hartpury opened the scoring after 10 minutes as the hosts stretched their opponents from wing to wing before releasing Nathan Thomas on the left.

The familiar sight of heavy rain soon appeared and conditions became very testing, with both teams barely able to string two phases together.

Bournemouth enjoyed a decent spell during the second quarter and lock Jack Hennings drew them level on the half-hour mark when he burrowed over from close-range following a driving lineout.

Hartpury booted the ball dead from the kickoff, but their pack steamrollered their counterparts in the resultant scrum and Steve Leonard scythed through for a fine solo score. Craig Jackson converted.

Joe Rees then saw yellow for the visitors as the college side flooded forward again, before Reynolds touched down for his first on the stroke of half time after Leonard and Thomas combined superbly in midfield.

Bournemouth started the second period well and ran a tight ship with 14 men, only to fall a man down again when former Hartpury man Russell Westcott was carded for a deliberate knock-on.

The Lions produced several more decent spells themselves and the hosts had to be alert to keep them out, especially after Jackson was sin-binned.

But the ventures ultimately proved fruitless and Hartpury secured the bonus point four minutes from time as Reynolds capped a flowing counterattack.

Not content with that, the winger completed his treble off the restart.

Bournemouth were caught short of numbers out wide as Hartpury ran from long-range.

The outstanding Leonard straightened and punched through the covering defence before setting Reynolds free (pictured), with Jackson’s extras rounding off the scoring.

Hartpury would like to thank Bournemouth for an excellent match and wish them well for the rest of the season.

Hartpury’s next match is away at Exmouth on Saturday 15th February. 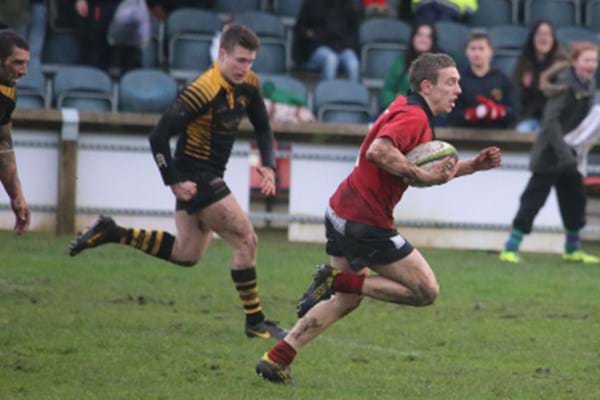