Hartpury agriculture student Tudor Roderick may be eyeing a career in the world of politics after a visit to the European Parliament with the National Farmers’ Union of Wales.

Tudor, 17, a first year student studying a BTEC Diploma in Agriculture, is considering the position as a possible move later in his career after having his eyes opened by the MEPs he was allowed to quiz during the visit.

“I really enjoyed it,” Tudor said. “It’s a world apart from what I’m used to and anything I’ve done before. I’m definitely going to stay open-minded towards opportunities within politics, but at the moment I’m focusing on my agriculture studies.”

“It was a great to get a better understanding of politics and its relevance within modern farming and how it can affect the industry I want to work in.”

Tudor and 14 other members of the Welsh NFU were able to spend time quizzing members of the European Parliament, as well as sitting in on important meetings regarding the passing of new legislation.

The group also got the chance to sit down with the MEP from South Wales, where the young farmers put across their views on how farmers of a similar age to them could do with more support when looking to start their own farm.

Stephen James, the President of the Welsh NFU, also provided the young farmers with a chance for further questioning about the future of farming in Wales before they left for London’s Houses of Parliament.

Tudor, whose family own a cattle and sheep farm, spent time in London talking to various Members of Parliament – including his own local MP, Roger Williams (Brecon and Radnor) – as well as an NFU representative.

“What I’ve understood from the visit is that it’s going to be tough for us for the next five years but that it will get better and the industry will pick up in the future,” Tudor added.

“Once I’ve finished studying, I want to build on everything I’ve learnt by travelling the world and viewing farming and how it works in different areas. And then use that knowledge to hopefully bring ideas back to Britain to help not just my own farm but hopefully others as well.” 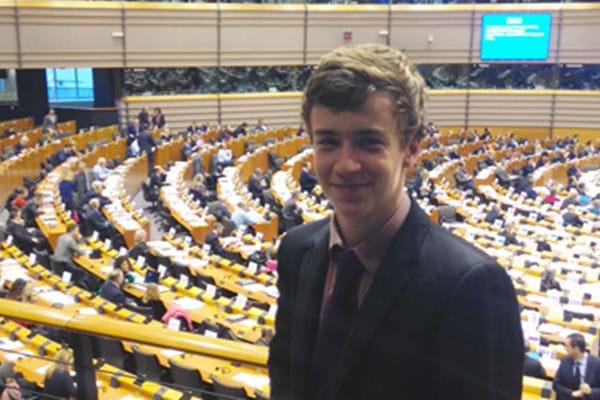