Prior to this game, Fylde had won all 10 of their previous home fixtures, averaging just less than 40 points per match.

Hartpury came into the match with six successive wins under their belt. Something had to give.

In the end it was Fylde’s home record that was shredded, much of the damage having been done during a blistering first half in which the visitors all but sealed the result with four tries and an almost flawless performance.

Energetic flanker Dan Thomas was, deservedly, the focus of much admiration in the post-match clubhouse discussion, but this was an excellent all-round showing by Hartpury. A sparky and clinical first half was followed by a mature defensive performance after the break.

The front five, bolstered by the return of the impressive Joe Batley, did everything required of them to create a platform, whilst the back row of Tom MacDonald and Lewis Ludlow, plus Thomas, put in an immense effort both with and without the ball.

Outside them, the back division largely kept their much-lauded opponents in check and offered plenty of threat with the ball in hand.

Fylde, in contrast, had an off day. Their all-action style, in which a ball is rarely kicked, depends on accuracy and vision, attributes which deserted them on a day when possession was often wasted through either muddled decision-making or plain poor execution.

Hartpury had secured their try bonus by the 36th minute, three of the tries being snapped up by Thomas.

Mat Protheroe, starting at full-back, had a massive hand in the first. Fylde had looked lively in the opening minutes and were pressing in the visiting 22 when turnover ball gave Protheroe the broken field opportunity he loves.

Good feet and pace took him through the Fylde ranks and he covered at least 70 metres before an excellent cover tackle from winger Dorrington halted his progress. However, open-side Thomas was on hand to collect the ball and canter over for a try which Thompson comfortably converted.

The lead was short-lived as Fylde hit back, working a good overlap for prolific winger Oli Brennand to scamper over for his 198th career try, equalling the all-time record for the Lancastrian club.

But this was not a game in which Hartpury were to be denied and the pack now started to turn the screw on the Fylde eight. With 14 minutes played, a penalty was kicked to touch deep in the Fylde 22.

Hartpury took good ball from the line-out, as they did all afternoon, and the following drive looked like going all the way before Thomas peeled off the back to score untouched (pictured).

That set the pattern for the remainder of the half as Fylde were limited to occasional break-outs by a ferocious Hartpury effort.

There was further reward for the visitors twelve minutes later. A series of attacking scrums under the Fylde posts came to an end when referee Gammage felt compelled to award a penalty try after the hosts had disrupted once too often.

It was all Hartpury now and their dominance was complete shortly before half-time. Phase after phase of direct running sucked in the home defence before the ball eventually went wide. It was no great surprise to see Thomas collect the final pass and surge over, the Welshman thereby completing a first half hat-trick to make it 7-28 at the break.

It was expected that Fylde would respond in the second half and, to an extent, they did. Enjoying more of the ball they were able to run their intricate patterns, but there was a sense that they were largely playing in front of the Hartpury defence, rather than making inroads.

Prop Adam Lewis did find a way over just after the hour mark, but Hartpury’s defensive cohesion was such that a turn-around never looked likely.

In the end it was Hartpury who completed the scoring. Minutes after a lung-busting length-of-the-field effort from centre Craig Jackson had ended just short, the ball was back in home territory.

Pressure forced a Fylde turnover and the ball was moved quickly to replacement Jamie Forrester who had picked a great line. His excellent floated pass allowed flyer Steph Reynolds to hold off Brennand and finish in the corner. Thompson converted brilliantly from the touchline to be five from five in the match.

In a season that just continues to get better and better Hartpury, now sixth in the table, welcome Darlington Mowden Park to the college next week, kick off 2.30pm.

We would very much like to thank Fylde for their warm hospitality and wish them well for the remainder of the season. 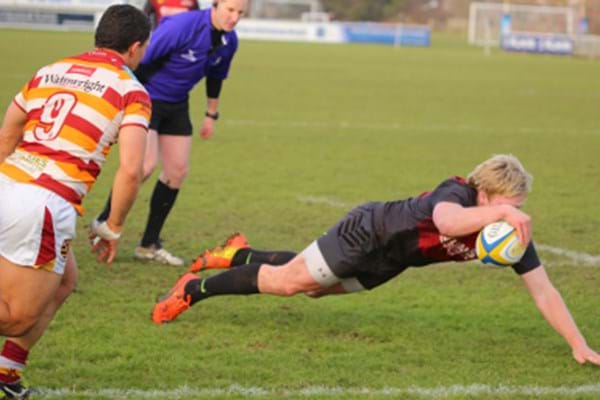