Hartpury collected their 19th win of an excellent debut season in National One, but were pushed all the way by their visitors from Tyneside, who picked up a bonus point for their efforts.

There was more than a hint of ‘end of season’ about the game. Blaydon, having enjoyed a mixed year in terms of results, are well clear of the relegation drama whilst Hartpury were playing for the potential of finishing in fourth place, representing an exceptional achievement.

Despite glorious sunshine, the players were hampered by a strong wind which made handling and control difficult. Ultimately, it was a clinical spell in the third quarter that clinched the result when, keeping the ball in hand, Hartpury finally managed to punch holes in an otherwise resolute visiting defence.

With a run of thirteen wins from fifteen fixtures stretching back to early December, Hartpury approached the game in confident mood. Mat Protheroe was back to start at fly-half, while the forwards had a solid look, with Joe Batley taking his place in the second row.

The game started well for the home team. After early Hartpury pressure Blaydon launched an attack of their own. However, the ball was spilt under pressure from Bartle and was quickly transferred to the hands of flying winger Steph Reynolds.

He needed no further invitation and comfortably had the pace to outstrip the Blaydon defence (pictured) to leave Craig Jackson with an easy conversion.

Based on recent form, there was a feeling that Hartpury would build quickly on their lead. But some indifferent handling and a lack of composure at key moments ensured that this did not happen.

Blaydon also had plenty of say in events. Apart from a line-out best described as ragged, the northern forwards acquitted themselves well. They troubled their hosts on more than one occasion at the scrummage and had the knack of winning big turnovers at vital times throughout the match.

Blaydon were also prepared to work their way patiently through the phases and twice got their reward in a generally scrappy first half, Smithson and Baggett crossing for similar scores in the 12th and 31st minutes respectively.

As Hartpury continued to frustrate their supporters, it looked as though Blaydon might take their lead into the break.

However, in the 39th minute Jackson drilled a penalty into touch around 10 meters out, before Batley took a beautiful quick ball off the top of the lineout.

With Blaydon ready to defend the inevitable catch and drive, the ball was instead moved infield before Protheroe cleverly switched back to the blind side for Jaike Carter to finish strongly.

Jackson’s excellent conversion had Hartpury ahead by two points at half time.

The hosts were much better into the wind and extended their advantage immediately after the re-start. Protheroe did the damage with a typical gliding run from inside his own half before being dragged down five metres short.

The support was good and quickly recycled possession allowed wing forward Joe Dancer to fully extend his lanky frame to touch down, Jackson again doing well to add the kick against the elements.

Now enjoying their best spell, Hartpury were suddenly dominant with Batley and back row replacement James Voss both carrying powerfully and repeatedly into a creaking Blaydon defence.

After 52 minutes flanker Dan Thomas peeled off a driven line-out to cross again, before another try on the hour appeared to put the home team out of sight.

Jaike Carter, enjoying a productive afternoon, provided an injection of power and pace to open up Blaydon’s right flank and the busy Vellacott was in support to claim the score.

With the job seemingly done, Hartpury then eased back and allowed Blaydon to get unnecessarily close before the end. Visiting skipper Laughlin was on the end of another patient attack before big lock forward Will Witty scrambled over to set up nervy finale.

However, Hartpury roused themselves for a last effort and Jackson settled matters with the final kick of the game.

Results elsewhere - Fylde and Blackheath both suffered defeat - ensured that Hartpury did indeed move into fourth place, which is where they will finish if they can win their final game, at Wharfedale. 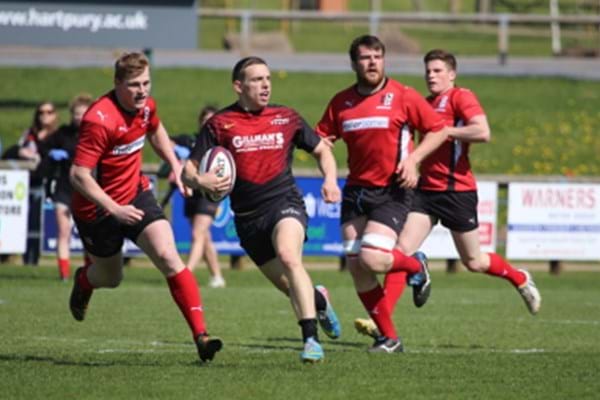