Hartpury’s staff recently showed the students how it’s done during a charity football game, running away 2-0 winners over 90 minutes as they raised money for Cancer Awareness.

Goals from college lecturer Andrew Sheppard, who also opened the scoring in last year’s match, and college rugby coach Sean Marsden were enough to give the staff victory – and bragging rights – for the second year running.

With the staff running away 5-1 winners in last year’s game, this match was another fiercely contested affair with both sides stifling each other for long periods in the game as they looked to take control.

It wasn’t until a moment of brilliance between Sheppard and Dan Holloway that the sides were really separated as Sheppard latched on to Holloway’s through ball and slotted under the advancing keeper after good pressure in the middle from the Hartpury staff.

Earlier in the half, Sheppard had been called into a last ditch block as well to keep the staff in the game while goalkeeper Jamie Moore also made a number of good saves to maintain Hartpury’s half-time advantage.

With a roll-on, roll-off substitute policy, both sides made changes throughout the game but it was the staff who started the quicker in the second half as a handful of chances fell to Marsden who, having started the game at left back, found himself up front.

With his usual position on a pitch either on the wing or at full-back in a rugby game, Marsden was unlucky not to have doubled the staff’s advantage with one of his first second-half chances.

A neat ball through from junior football manager Paul Tassell found Marsden on his stronger left side and, after holding off the defender, he slipped a low shot past the goalkeeper but was unfortunate to see it bounce back off the far post.

Having also put a back-post header wide from Alan Powderhill’s delivery from the right hand side, Marsden finally found the back of the net after some slick build up play and another precise final ball from Paul Tassell.

Hartpury’s students, who play for the fourth team in the BUCS league, were unlucky not to register on the scoresheet as Moore made a number of key saves again in the second half.

Players from both sides donated money to charity in order to play in the game and the college will continue to look for donations towards Cancer Research over the coming weeks. 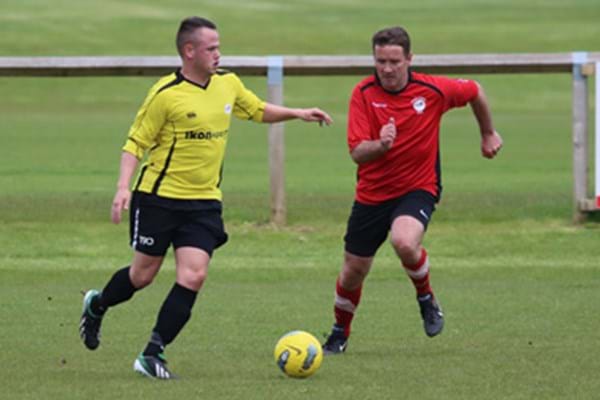