Hartpury were quick to put their opening day defeat behind them as a six-try blitz gave them maximum points against visitors Fylde.

For Fylde, it was a day to forget. Traffic problems resulted in a delayed kick-off and a truncated warm-up, while a dynamic start had the students 15-0 ahead at the end of the first quarter.

To make matters worse, the Lancastrians were down to 14 men on the half-hour when replacement forward Joe Robinson saw red for what was interpreted as violent play. Although his action was more petulant than dangerous, his lack of discipline made a hard task even harder for his team.

Disappointed by the performance at Hull, Hartpury rang the changes. Gloucester academy centre Elliott Creed made his first start and he was joined by winger Jack Evans, who was on the bench.

Another debutant, James Stephenson, played on the open side of the scrum, whilst there were welcome returns for influential centre Steve Leonard and number 8 Will Safe.

Stephenson it was who opened the scoring after five minutes, touching down at the back of a driven line-out.

Minutes later, it was try-time again as a well-worked move sliced open the Fylde defence. From a midfield scrum, Leonard and Creed pinned their markers in place as an arcing run from Mark Harrison, coming off his wing, took him through a large gap inside Fylde flyer Ollie Brennand.

Harrison drew the cover, before releasing Gareth Thompson for a 25-metre sprint to the line. He converted his own try with a good effort from wide out.

Thompson then extended the lead with a simple penalty, before Robinson’s indiscretion put the visitors deeper in the mire. Fylde were struggling to put anything together with the ball in hand and their cause was not helped by a line-out that refused to function throughout the afternoon.

The college had played with a strong breeze at their back for the entire first half and there was a sense that 15-0 at the break did not fully reflect their dominance. Certainly, they had battered the visitor’s line for long periods and a little more composure at key moments could have seen at least one or two more tries added to the tally.

Not that they needed to worry, as they scored again almost immediately after the re-start. Fylde lost possession in contact and the students were quick to run back the turnover ball. Steve Leonard made a typically forthright burst through the centre and scrum half Robbie Shaw was superb in support to take his pass and finish by the posts.

Fylde did hit back when the prolific Brennand seized upon a rare Hartpury mistake to score, but normal service was resumed in the 50th minute when Safe finished off another catch and drive with the Fylde forwards seemingly in a state of confusion.

Job done, Hartpury emptied the bench and continued to keep their opponents largely pinned in their own half.

In the final 10 minutes Leonard got his reward for a strong personal performance alongside Creed, when he broke tackles to finish from 10 metres out, after Hartpury had stretched the Fylde defence through a number of phases.

The college concluded their scoring two minutes later when Jacob Perry, an assured presence at fly half, put through a grubber which bounced nicely for replacement winger Jack Evans to collect and run around under the posts.

There was just time for Warren Spragg to grab a late try for the visitors, but that will have been little consolation after a sub-standard display from a team which finished fourth in the league last season.

Hartpury, meanwhile, can reflect on good performances in all aspects of the match, with blindside flanker Jake Polledri, an Italian Under-20 international also new to the college, being rightly named as man of the match after an outstanding individual effort in both attack and defence.

There is no doubt that the coaching staff will be a lot happier with this display and the whole squad will be lifted before next Saturday’s challenging trip to early league leaders Coventry. 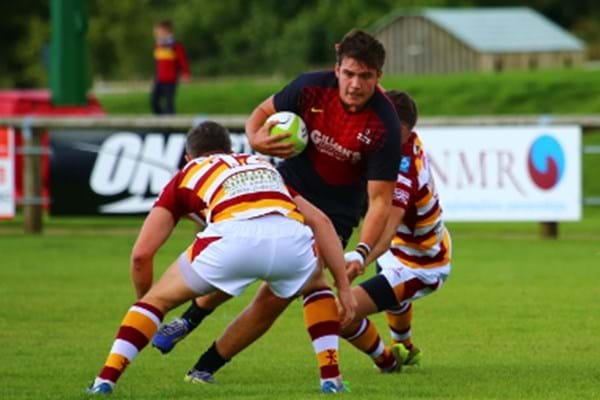