If they gave out parenting awards in the animal kingdom then Buddy the emu would be high on the list after doing his fair share of duties during the breeding season by diligently sitting on eggs to keep them toasty warm during the chilly January weather.

The college’s new female emus, Wanda and Wendy – who joined the animal collection in July 2016 – have just laid their first ever eggs and it’s now down to Buddy to keep well incubated for somewhere between 50 and 55 days.

Although near-freezing temperatures, persistent rain and thick fog don’t seem like ideal conditions for starting a family, January happens to be the height of the breeding season for emus. The season lasts from November through to March and during this time females can produce up to 30 eggs.

Females will lay an egg every few days and you’d be forgiven for mistaking them for avocados as they are naturally green in colour and can weigh up to 1kg. So far six eggs have been laid, which means Buddy is busy incubating them as in the wild this responsibility falls to the male.

Despite his elderly age, Buddy has taken his duties seriously and has been patiently incubating the eggs for several days already. He will need to sit on the eggs throughout the day and night with only a few short breaks to feed and eat - now that’s dedication!

Aleksandra Lipinksa, manager of the Hartpury animal collection, said: “Whatever the outcome of this breeding season, it is exciting to see that the emus are displaying this kind of natural behaviour and consider their enclosure a safe and suitable environment for their offspring.” 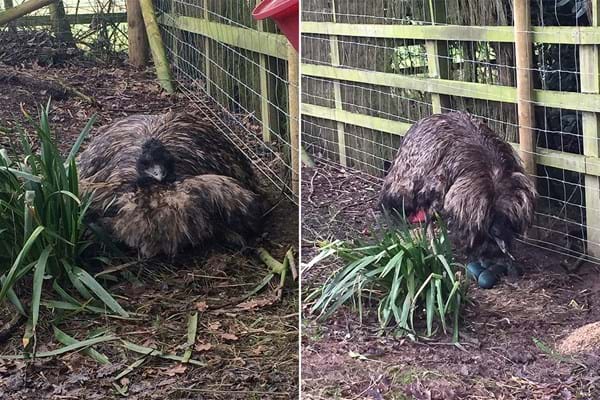