Hartpury’s table toppers are set for a winner-takes-all showdown as Loughborough visit tomorrow evening in the final round of the BUCS Super Rugby competition.

Hartpury, who sit two points clear at the top of the inaugural table, will be looking to avenge the narrow 22-20 reverse defeat to their opponents a fortnight ago when they face them in Wednesday evening’s clash (kick-off 6.30pm).

The game will see the first ever winner of the BUCS Super Rugby competition crowned - which for the first time this season merged universities from the old north and south premier divisions into one national league.

Hartpury’s Director of Rugby, John Barnes, said: “It’s been a great season already with the introduction of the Super Rugby competition and for it to come right down to the wire for the top two teams to be facing each other for the league title is great. It should be a very good game and both teams will certainly be going all out for the win.

“I wouldn’t say there is any more pressure as such; obviously it’s a massive game to decide who finishes first and second. It’s a cup final effectively and as such there will be a lot more excitement and desire from both sides to win the game. Home advantage is obviously handy for us but I don’t think that venue is going to weigh too heavily on the result of the game.”

Hartpury head into the game off the back of a 35-17 win over Cardiff Met while Loughborough will have their tails up having beaten a potentially tricky Bath side last week after getting the better of Hartpury the week before. Captain Seb Negri made it clear following the BUCS game that the boys were playing well but still had areas with which they could improve and Barnes says the group have trained well in the lead up to kick off.

“One thing that came out of the Loughborough game was our scrum and we’ve worked hard on that over the last two weeks. There were also a few issues which showed in the Cardiff game – like they do in most games – but the boys have worked really hard in training and it’ll all come down to tomorrow night’s game,” Barnes said.

“We had our final preparation for the game today up against the RFC side and the boys are really up for it.

Barnes looks to have no fresh injury worries amongst the squad and should have the usual names to call on when Hartpury name their side ahead of tomorrow’s clash.

The game kicks-off at 6.30 and is open to all spectators so if you’re in the local area and want to watch two teams at the pinnacle of university rugby, head over to the Hartpury campus ready for kick-off.

The winners of the game are also set to be presented with the inaugural BUCS Super Rugby trophy following the game. 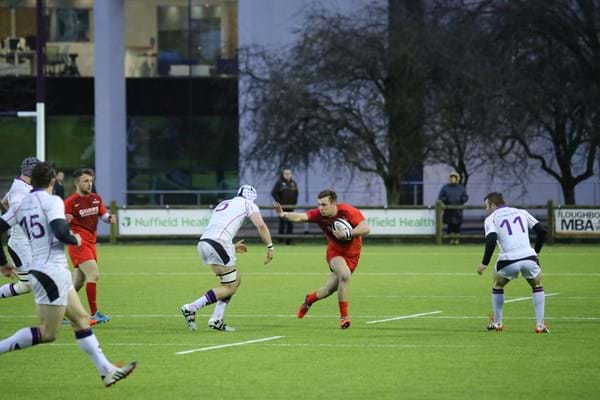