Gloucester-Hartpury recovered from a lacklustre first half to book the final play-off spot in the Tyrrells Premier 15s with a 36-8 victory over Loughborough Lightning at the Gillman's Ground.

The home side took their revenge for a 43-33 defeat by the same opposition back in December, putting in a bruising second-half performance as they stepped up their aggression and their execution.

Prop Sarah Bern and flanker Taz Bricknell both put in an excellent shift, while Ceri Large showed a deft touch with boot and hand to orchestrate proceedings from fly-half alongside scrum-half Bianca Blackburn, while Ellie Underwood and Kelly Smith used their devastating pace to good effect to wreak havoc on the wings.

But it didn't go to plan straightaway for Susie Appleby's side as Loughborough Lightning took a lead on six minutes when centre Hannah Phillip slotted a penalty after a sustained spell of pressure in the home 22.

It could have been worse, as Lightning fly-half Natasha Jones cut a nice line to open up the midfield with Phillip on her shoulder, but a knock-on thwarted the clear-cut opportunity. The home side were paying the price for trying to play too much rugby in their own 22 and forcing play instead of clearing their lines.

The Lightning were much more aggressive at breakdown and played at a much higher intensity, although home prop Sarah Bern was outstanding and Courtney Gill made some crunching hits.

Gloucester-Hartpury were then dealt a further blow when second row Molly Morrissey went down in clear pain and was taken off on a stretcher after a long stoppage to be replaced by Catrin Edwards.

Finally, on 23 minutes Gloucester-Hartpury found some go-forward following a nice break by Kelly Smith and winger Ellie Underwood was almost able to get on the end of a lovely lofted kick from fly-half Ceri Large, but Lightning somehow snaffled back possession.

And the visitors took advantage of the let-off on the half-hour, as Lightning fly-half Natasha Jones made a touchline break to score in the corner after Gloucester-Hartpury again failed to commit enough numbers to the breakdown and paid the price.

But Gloucester-Hartpury hit back four minutes later after a much improved spell, as great work by Bern followed by a powerful run by centre Rachel Lund breached the Lightning 22.

Winger Kelly Smith then took off on a lovely break and the ball was moved out rapidly through Large and Tatyana Heard to Ellie Underwood, who almost squeezed in at the corner.

With subsequent scrum ball safely secured, flanker Tabitha Copson broke off and went close, but it was Underwood who finished well, spinning out of a tackle to score in the corner.

Pinching the ball at a Lightning line-out metres from their own line, they showed great aggression at a series of rucks to put Lund in space to score, the centre getting on the end of a lovely floated pass from Large.

Ellie Underwood kicked the conversion for 12-8. With Gloucester-Hartpury now on top, Lund went again after the Lightning were caught following a quick tap.

Bricknell and Heard interchanged passes to create the gap for Lund to get over. Underwood added the extras to open up a 19-8 lead.

Ellie Underwood then showed great pace to scorch over after great work by Bern and a strong carry from Ellie Kildunne before, with Lightning under massive pressure, the penalties piled up and centre Carys Williams was sent to the sinbin.

With 12 minutes left to play, Gloucester-Hartpury made it safe with a try from the impressive Kelly Smith after the ball was moved out wide through scrum-half Bianca Blackburn, Ceri Large and Bern.

And the scoring was completed as Gloucester-Hartpury were awarded a penalty try to take a commanding 36-8 lead after replacement Connie Powell went on a charging break in midfield and then Taz Bricknell, who was bristling with aggression throughout, carried to within a metre of the line before being taken out by a high tackle.

The victory earned Gloucester-Hartpury a place in the semi-finals of the Tyrells Premier 15s, to be played over two legs on the weekends of the 7-8 April and 14-15 April.

Picture: Celebrations after the final whistle 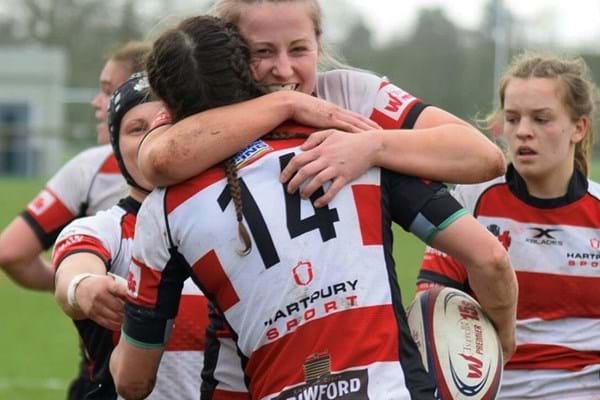