The team, consisting of Carl Hester, Charlotte Dujardin and Charlotte Fry, pulled out all the stops with relatively young and inexperienced horses to secure a third successive Olympic team medal in the sport.

Dujardin, riding the major championship debutant Gio, anchored her team's performance, posting a score of 2,617 points. "He is so inexperienced. I was absolutely thrilled with him. He is only 10 years old and what he has delivered here, I can't ask for any more," she explained after her test.

Hester, now in his sixth Games, scored 2,577.5 with En Vogue. The 25-year-old Fry, whose late mother, Laura, competed for Great Britain at the 1992 Barcelona Olympics, registered 2,528.5 aboard Everdale.

On Wednesday, Charlotte Dujardin made history by becoming the most decorated female Olympian of all time, earning a bronze medal in the individual competition aboard the stunning chestnut, Gio. Dujardin had joined rower Dame Katherine Grainger and tennis player Kathleen McKane Godfree on five medals just one day earlier. Dame Katherine Grainger officially opened Hartpury's £8.8m Sports Academy back in 2019.

Hester and En Vogue finished eighth individually, while Fry and Everdale settled for 13th on their Olympic debut.

Both Hester and Dujardin are regulars at Hartpury, competing at events such as the NAF Five Star Hartpury Festival of Dressage and making use of the Hartpury Equine Therapy Centre facilities as part of their training programme. Gio, or Pumpkin as he's more affectionately known, even won at the Festival back in 2019.

Carl Hester plays a key coaching role in Hartpury's Equine Academy, supporting students with his years of experience and knowledge. Members of the Equine Academy have gone on to compete at the elite level in disciplines including dressage, show jumping and eventing.

"Charlotte (Dujardin), Carl and Gareth are well known to us here at Hartpury and we are so privileged to have had the chance to see these horses and riders in action at previous Festivals as well as seeing them during their visits to the Equine Therapy Centre. We feel like we've seen horses like Gio 'grow up' since he first appeared in our International Arena in 2019 and are almost like proud relatives.

"Carl's experience in dressage is simply unrivalled and our students benefit hugely through his role as Equine Academy trainer as well as having the chance to watch him compete. Charlotte's (Dujardin) achievement of becoming the most decorated female Olympian of all time is well deserved and hugely exciting for the sport. We're so proud of them all.

"We can't wait to see what our para-dressage riders have in store later on this summer, following their preparatory competition at Hartpury earlier this month," he added.

The eventing action gets underway on Thursday with the first horse inspection, followed by two days of dressage. 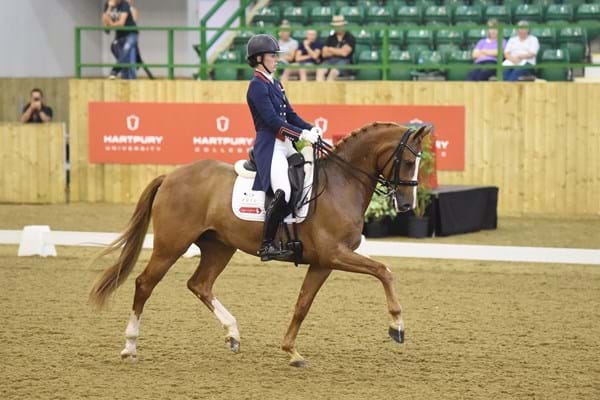