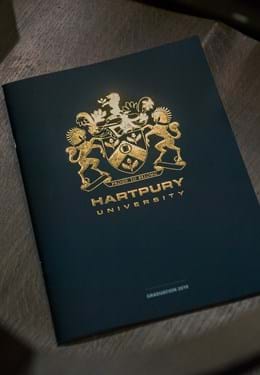 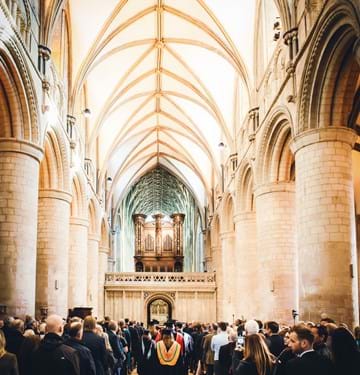 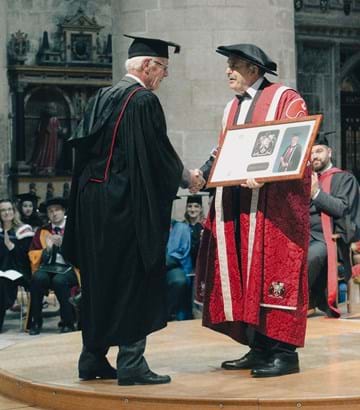 Mark was a governor of Hartpury for 25 years, 17 of which were spent as Chair. During that time Hartpury developed from an institution with only 69 students and under the threat of closure, to the outstanding institution it is now. Mark was absolutely instrumental in this progress as the influential Chair of the Board of Governors.

Mark, a local farmer and businessman, is also a former governor of the University of the West of England, has held the chair of the CULTIVA (ELITE) Consortium, and was a member of the Gloucestershire Federation of Colleges. He was a local county councillor for the area including Hartpury, and was also involved in the setting up of the radio station Severn Sound.

This honorary degree is awarded in recognition of Mark’s contribution to education and Hartpury. 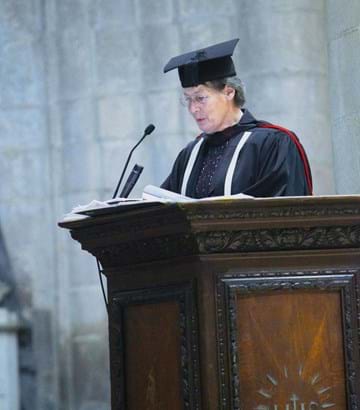 Jane Holderness-Roddam achieved sporting fame by winning Badminton on her horse Our Nobby in 1968. She was selected for the Olympic three-day event team and became the first British woman to compete and win a team gold medal. Her other horses included Warrior, who carried her to victory at Burghley in 1976, Team Gold at the European Championships at Burghley in 1977, and to success again at Badminton in 1978.

Following retirement from eventing, Jane remained involved as Chairman and President of British Eventing. During her illustrious career she has judged, instructed and competed in many countries and made a significant contribution to equestrian sport and to the promotion of related education and training, including improving the welfare of horses. Many charities have benefited from Jane’s work, including World Horse Welfare, The Brooke and Riding for the Disabled association, where she held the role of Chair for many years.

Jane was a governor at Hartpury for eight years from 2007. She was awarded a CBE for services to equestrian sport in the Queen’s Birthday Honours List in June 2004, and currently serves as Lady-in-Waiting to The Princess Royal.

This honorary degree is in recognition of Jane’s contribution to equestrian sport and to the promotion of equine-related education.

We fondly remember Martin Baber, who passed away in 2019. Martin was a former student of Hartpury and a governor for 24 years, retiring in February 2015. He was a key figure in helping to form a new Board of Governors in 1989 when Hartpury’s future was under threat. His knowledge ensured the right people were presented for election to the Board, and he nominated local businessman and farmer Mark Davison to be elected as Chair, believing him to be the best person for the job. Martin helped Hartpury to become one of the largest land-based education institutions with an outstanding reputation.

He was made President of Hartpury Rugby in 2010 and used this role to encourage higher achievement and greater participation in the sport’s activities. He was responsible for the formation of the Gloucestershire Farmers Trust and he managed to retain Agriculture House in Gloucester as a venue for farmers to meet.

This honorary degree is awarded in recognition of Martin’s contribution to education and the agriculture sector in Gloucestershire. 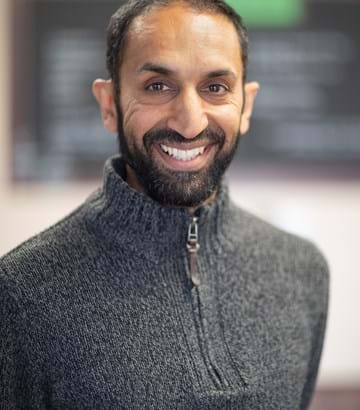 Imran Atcha has been a community worker in Gloucester for over 20 years. He has invested his own personal experience and passion for horses and animals, into making them accessible for children from the inner city, in particular those from minority ethnic backgrounds who are under-represented in the UK.

This led to the establishment of the first inner-city based riding school in the southwest in 2015. One of only a handful of similar projects across the UK. In 2010, Imran used to bring three children at a time to Hartpury for their introduction to horses. Now, up to 40 children a week enjoy lessons at St James City Farm Riding School, in one of the most built up and deprived areas of the county. Lessons are deliberately made affordable and the ponies are also taken to primary schools and community settings. Children are introduced to different aspects of the equine world including shows, racing, eventing and other care. Imran has remained involved with Hartpury, having undertaken his basic training and coaching exams, being mentored by the equine department staff.

As well as being a founding member of the riding school, Imran manages St James City Farm. Its aim is to provide a taste of the countryside in the heart of the city of Gloucester alongside the riding school. It has a collection of farm animals with free access to local children, and provides regular volunteering opportunities to local young people, as well as Hartpury Animal Care students each year.

This Honorary degree is in recognition of Imran’s community work and the promotion of equine and animal education. 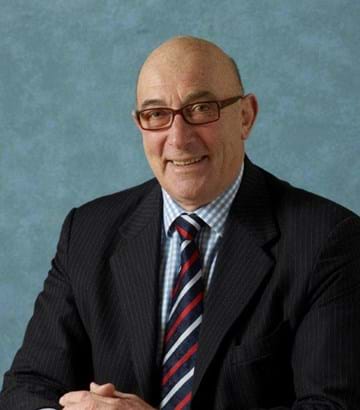 Malcolm was Principal of Hartpury College for 22 years. Appointed to the post of what was then the Gloucestershire College of Agriculture and Horticulture in 1990. He took Hartpury from 69 students on two agricultural courses and under threat of closure, to around 3000 students on a range of equestrian, animal management, sport and land management programmes. By his retirement in 2012, Hartpury College was graded Outstanding by Ofsted.

Malcolm’s wider contribution is significant. He is currently Chair of the British Equestrian Federation, an Honorary Vice President of the Riding for the Disabled Association, one of only five life members of Gloucester Rugby, a Fellow of the Royal Agricultural Society and former Director and Council member of the RFU.

Building on Malcolm’s CBE award for services to Further Education in 2012, this Honorary degree is awarded in recognition of his contribution to education and Hartpury.

Majeed is a Ghanaian international and professional football player who currently plays for a French club, RC Strasbourg. He has had stints with a number of European teams, including Swedish side BK Häcken, Trabzonspor in Turkey, French sides Lorient and Nantes, Portuguese Champions League club FC Porto and Russian giants Spartak Moscow.

Growing up in Tamale, Northern Ghana, he remembers the lack of opportunities surrounding him and his family. However, aged 12, Majeed started his career at Right to Dream – a Ghanaian football academy. Majeed’s access to coaching, mentoring and programmes at the Academy and Hartpury shows the significant impact educational resources can have. It has inspired Majeed to provide life-changing pathways for his local community in Ghana and he continues to give back and act as a national role model. In 2014, The Majeed Waris Foundation was launched to provide material and financial assistance to aid health and education in Tamale Metropolis, Ghana. Since its inception, the foundation continues to develop its partnership with schools, hospitals and community groups.

He was named the Swedish Premier League Player of the Year in 2012 and top goal scorer, going on to win the Premier League in Portugal in 2018. He has played over 30 times for the Ghanaian national team. He has achieved significant milestones for Hartpury and Right to Dream, by becoming the first graduate to score for Ghana and Hartpury’s first World Cup player in 2014 in Brazil.

As well as excelling as a professional footballer and representing Ghana on the pitch, Majeed’s work in education and his local community continues to inspire. A worthy recipient. 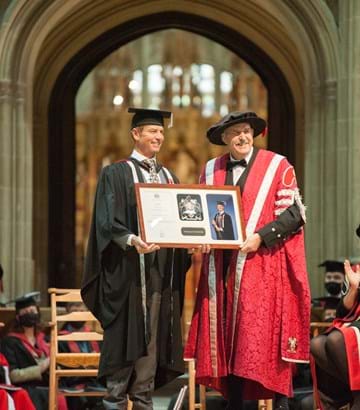 Carl Hester is a household name that is synonymous with British Dressage. He has numerous, significant achievements in top-level dressage. He helped Britain to their first-ever team European title in 2011, also picking up individual silver on his horse Uthopia. He is a fivetime Olympian, achieving Gold at London 2012 and Silver at Rio 2016. He became the first Honorary Patron of British Dressage in November 2016 and is often described as one of Britain’s most successful dressage riders, holding 68 national dressage titles.

Carl has extensive involvement in developing other athletes and nurturing riding talent, as well as having produced many horses to Grand Prix level. He is committed to the development and welfare of both horse and rider.

Carl is an advocate of Hartpury’s educational programmes and incredibly supportive of Hartpury’s Equine Academy programme. He
periodically visits Hartpury to train students and welcomes them to his yard for training opportunities. He is also a familiar face at Hartpury events, competing in numerous competitions here.