Hartpury’s rowers added an U23 national title to their collection during a race meet packed with reigning senior World and Olympic Champions.

The four-person crew of Jess Newson, Mathilda Hodgkins-Byrne, Jas Bradley and Flo Pickles finished as the highest ranked women’s U23 crew after finishing sixth overall in the A final at the British Rowing Senior National Championships.

The result was a fantastic achievement with three out of four rowers ages 19 or under - the girls were only competing at U23 level due to one over-age rower.

With several world and Olympic champions on show, the girl’s achievement proved all the more promising. To make the day even better, the Crew also received their medals from legendary Olympic rower, Greg Searle (pictured).

Hartpury’s boys crew, rowing at U19 level, finished fourth overall in their age group after being placed alongside crews with the likes of Olympic sculling bronze medallist, Alan Campell.

Containing Level 3 Sports Coaching student James Bird, A Level students, Jack Williams and Joe Barnes as well as Toby Heaton who is based at the GB Rowing Start centre in Bath, the crew placed 26th overall in an event packed with current World and Olympic rowers.

Hartpury’s rowing head coach, Tom Pattichis, said “this was excellent experience for both of the crews involved. To be racing alongside World and Olympic champions is not something you get to do every day. Both crews gave an excellent account of themselves and for two predominantly under-19 crews, to come out with one under-23 national title and a fourth places under 19 finish is credit to the hard work we put in week-in, week-out.” 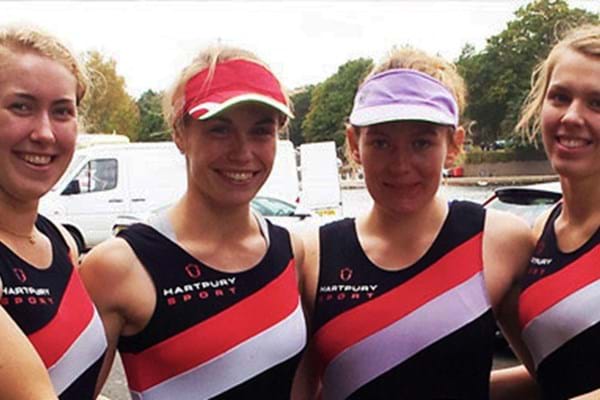