Hartpury struggled in the first half in the face of a formidable physical challenge from an imposing visiting pack, with Shelford the better side for long spells.

But fitness played a vital role as the College pulled away with three tries in the final quarter to register an ultimately emphatic win.

Hartpury made the perfect start when Craig Jackson’s break and a stunning Terry Fanolua offload set up prop Ricky Cano for a fourth-minute try converted by Jackson.

But Shelford improved after falling behind and, after Hartpury’s Dave McKee was yellow-carded, their pack forced their seven-man counterparts to concede a penalty try, Rory Hutchinson adding the extras.

The pendulum swung back in the hosts’ favour seven minutes before the break as Fanolua and Jackson linked well again to release Gareth Thompson, before three points from Hutchinson levelled the scores at half time.

Shelford stormed out of the blocks in the second period and, within two minutes, centre Grant Anderson exploited some weak tackling in midfield to burst through and edge his team five points clear.

Hartpury chased the lead down again, however, as Fanolua’s long pass located the oncoming Reuben Haile in the corner via a deflection before Carter crashed over out wide either side of Hutchinson’s second penalty.

As Shelford’s forwards tired, Hartpury demonstrated a ruthless streak and winger Carter ran a superb line off Tim Stevenson to slice through under the posts for his second try.

The outstanding Haile then raced home from 40 metres following a superb carry by Ben Roberts three minutes from time, with Jackson’s fourth conversion all but guaranteeing the win at 41-23.

But the best was yet to come as Hartpury went the length of the field in the final minute, with Carter and Ben Vellacott combining multiple times to enable the former to complete his treble.

Hartpury would like to thank Shelford for an excellent match and look forward to the return fixture in March.

Hartpury’s next match is away at Redruth on Saturday 23rd November. 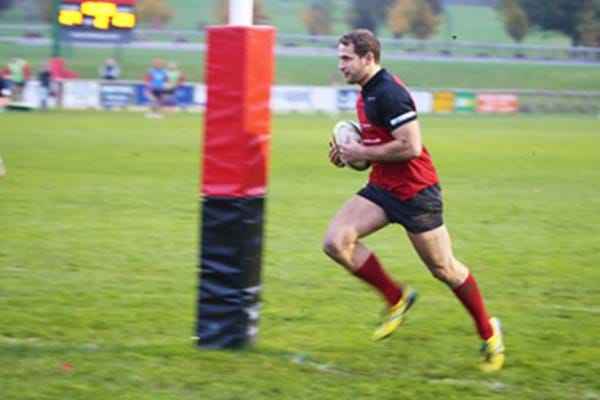