Hartpury’s new university women’s rugby team are celebrating after tasting their first success against a strong Exeter side.

Only formed earlier this academic year, the side also narrowly missed out on victory at a recent tournament in Bristol where they entered two teams: finishing 2nd and 4th.

You could be forgiven for thinking that Hartpury’s side had been training and playing together for years with the success that they are having. In fact, with the exception of two, there are 25 players who had never played rugby before this year playing in the team.

“It’s been a real testament to the environment they have created” said Head Coach, Craig Bonthrone. “It’s clear to see the girls are enjoying themselves at training and with that comes some real learning.”

The girls have been fortunate on top of their coaching from Craig and Ben Wroblewski (Head Coach) to have received support from two ex-international sevens players, Charlotte Drakeley and Amelia Boyd. Ben said that the girl’s knowledge of the game has been ‘invaluable’.

Even more recently the team all undertook the RFU’s Scrum Factory course, run by their local Community Rugby Coach. The girls learnt about good body management, body positioning, and began to build and create their own scrum, all gearing towards a competitive second half of the season.

Comprising of players from all areas of the college - equine, animal, agriculture and sport alike - the team are always looking for new players, and always ready to accommodate players from any part of the university. Whether they have played before or not the team with 2 coaches aims to cater for all needs. 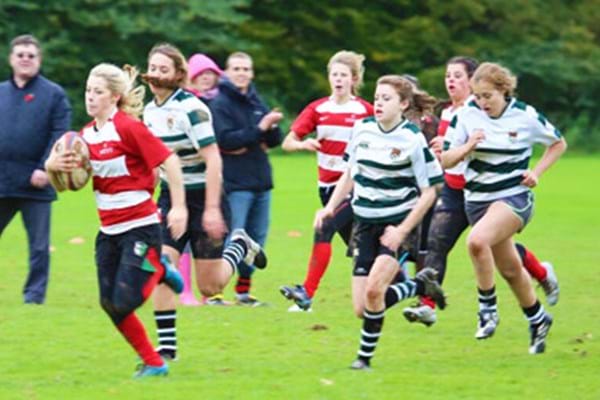