Billy Burns’ last-gasp penalty ensured that Hartpury College RFC edged a 39-36 thriller against Canterbury and maintained their six-point lead at the top of National Two South.

The College took the lead on eight minutes when prop James Gibbons showed a fine turn of pace to finish off Craig Jackson’s penetrating burst, with Burns adding the conversion.

Canterbury responded strongly and, after Hartpury’s Andy Chesters was sin-binned, Martyn Beaumont skipped through for a try improved by Tom Best.

The City Club were ahead four minutes later through Best, who gathered his own chip inside the 22 before slotting the extras.

Hartpury began to assert themselves in the second quarter, grabbing three tries in a six-minute blitz before the interval through Ross Moriarty, Steph Reynolds and Ben Roberts.

After Canterbury had successfully repelled a catch-and-drive, Hartpury battered away through the forwards before switching the ball right and locating the lurking Moriarty.

Reynolds scored Hartpury’s third straight from the subsequent restart, crossing in the corner after Steve Leonard had made the initial break and set the winger free.

And centre Roberts secured the bonus point four minutes before half time, touching down on the left as the home side worked the ball from wing to wing from a scrum.

But the hosts were reduced to 14 again two minutes into the second period when Jackson saw yellow for taking out Guy Hilton off the ball, before fullback Beaumont crossed to complete a brace as Canterbury went wide from a driving lineout.

Reuben Haile cancelled out the score as the powerful winger ran a kick back with authority to score in the corner, with the visitors swiftly replying in kind through Kwaku Asiedu, who shrugged off some weak tackles out wide.

Best struck a penalty to reduce the deficit to two points at 31-29, but Leonard’s five-pointer for Hartpury after Burns had sneaked through a gap took them out of touching distance.

The visitors refused to lie down, however, and Best appeared to have secured a share of the spoils when he converted Hilton’s try with seven minutes remaining.

But a Canterbury knock-on in their own 22 attempting to retain possession allowed the dominant Hartpury scrum to earn a penalty and set the stage for Burns’ winner.

Hartpury would like to thank Canterbury for an excellent match and look forward to the return fixture in March.

Hartpury’s next match is at home to London Irish Wild Geese on Saturday 7th December. 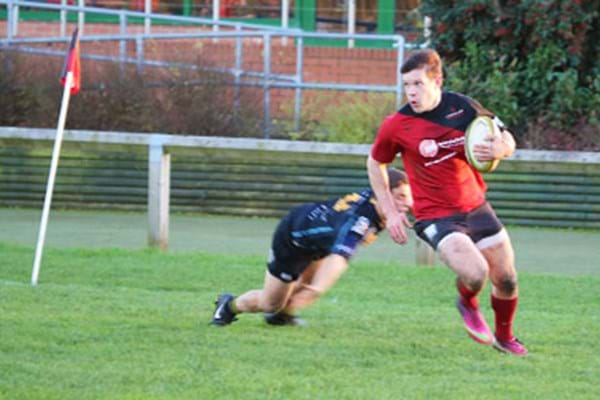