Hartpury has added yet another sport to its success story with the new Women’s Futsal team currently sweeping all before them, boosted by a bit of Brazilian flair.

Spearheaded by Sport Coaching Lecturer Luciana De Martin Silva, the team is making outstanding progress in both the BUCS competition and the FA Cup, while also seeing an influx of new members wanting to participate in the sport. This is in no small part down to the passion of Luciana, whose birthplace is the home of Futsal - Brazil.

Luciana said: “I have a background in futsal so I was extremely passionate in looking to develop it further at Hartpury. At the beginning, when the BUCS team was created, we only had three players!”

“Now, thanks to all of the support Hartpury have given us, we have a much bigger team and we are participating in the FA Cup qualifying league.”

The popularity of futsal has certainly increased with its appeal resting in the fact that anyone can play the game, regardless of their ability or experience.

Luciana added: “The great thing about futsal here at Hartpury is that it really is open to everybody. Some students want to train and play for social reasons, whereas some want to progress, which is why I had the idea about entering a team in the FA Cup qualifying league.”

And that decision has certainly borne fruit with the team winning all five of their games so far, scoring an incredible 62 goals.

The team has been boosted by the recruitment of a selection of players from outside Hartpury, some who represent their respective countries- Alice Evans, Amy Wathan and Jordan Guard have all represented Wales- and this has greatly benefited the students who play alongside them.

Lucy Lockier, Yazmin Nicette, and Emma Mundy are three current students who are currently a part of the unbeaten FA Cup team.

Lucy, a Masters student in Coaching Science from Bristol, said: “I came along to a training session and I really enjoyed the fast-paced nature of the game. Everybody in the squad was really welcoming and to be a part of the FA Cup team and to play with the international girls just makes you want to up your game.

“To play with and be coached by people who have a very strong background in the game has been so beneficial.”

Yazmin, a first year student in Sports Coaching, said: “I’m enjoying playing futsal so much and I feel I am constantly progressing.”

Emma, a third year student in Sports Coaching, said: “We have come so far in such a short space of time, but with the coaches we have, they are really helping us improve.”

Amongst the coaching staff is Julio Oliveira, the goalkeeping coach. Julio is a Masters student in Coaching Science at Hartpury. He said: “The opportunity to apply what I have learned in my Masters to such a great team environment has been brilliant! This has definitely contributed to my development as a coach.”

With the dearth of coaching available, the FA Cup side will be looking to make it to the semi-final stage of the competition, which takes place in June, at St Georges Park.

Luciana is certainly confident that this is only the beginning for this burgeoning sport. She said: “Futsal on a whole is definitely a lot more popular now. However, the issue with women’s futsal is that it doesn’t have the same structure as the men’s game yet. We are progressing a lot with our team and we want to keep going.”

Whether you are interested in playing recreationally or want to be a part of the Hartpury Futsal FA Cup team, please contact the head coach Luciana on luciana.silva@hartpury.ac.uk. Trials are taking place on a weekly basis every Monday at 8pm, in the Hartpury Sports Academy. 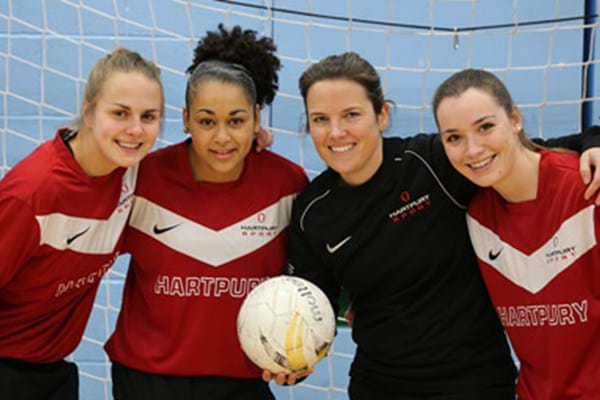