A Hartpury student currently working in a conservation project in Kenya is helping a primate in her care to potentially make it back into the wild.

Johanna Olsson, 22, who is studying a degree in Animal Science at Hartpury, is currently on her sandwich year in Kenya and is working at Colobus Conservation.

She has been working as the new release co-ordinator for a hand-reared Angolan colobus monkey called Betsy and has helped bring about amazing changes in her behaviour by using a simple training technique, unique to wildlife rehabilitation.

Betsy’s rehabilitation had been going very well until her companion Tumbo was released, leaving her as a solitary monkey. When Johanna started at Colobus Conservation, Betsy was spending a lot of time seeking mischief and was inadvertently rewarded with human attention due to the commotion she had caused.

Johanna suggested that 'clicker' training could help reverse this behaviour in Betsy and give her a better chance of returning to the wild. This was an idea which had previously been suggested but not yet tried.

Firstly, Johanna had to train Betsy to create an association between the click and the peanut by giving a peanut and clicking simultaneously. The next step in the training was to click, wait, and then give a peanut. This has now moved on to Betsy being rewarded with a click and a peanut when she is out of the enclosure at forest school and she is displaying appropriate behaviour.

Johanna said: “The idea is that the click and reward causes Betsy to feel positive when she is spending time in trees, foraging more independently and ignoring people.

“We are also using the clicker training to reward any form of interaction with wild colobus, which could then help to integrate her into a troop and one day herself become wild again.

“There have been huge improvements in her behaviour already and I'm really excited about supporting her to maintain this progress.”

The next step is for Johanna to work on 'target training' with Betsy. Target training teaches an animal to come towards, touch or stay by an object. In Betsy's case, this will be a stick with a golf ball on one end which will act as a ‘target’ which the animal learns to follow. Using the clicker, every time Betsy touches the target she will receive a click and then a reward.

This training can be useful in guiding an animal from one point to another, with Betsy being further encouraged to spend time high up in trees foraging. It can also reduce the need for human contact when manoeuvring Betsy from one spot to another.

Lucy Clarke, who is Subject Manager for Animal & Land Sciences at Hartpury College, said: “The variety of sandwich year placements experienced by our Animal Science students is huge. While many of them are working on fascinating projects in zoos and conservation projects in the UK, others, like Johanna, are thriving on the unique challenges available to them overseas.

“We do everything possible to support our students to undertake placements that focus on the areas of animal science that interest and inspire them most. They receive the very best training here with lecturers who have a wealth of practical as well as academic experience.

“They are equipped with the latest research and techniques and we are extremely proud to hear about the successes of students like Johanna, who has used her training to make such a difference to the life of an animal in her care.” 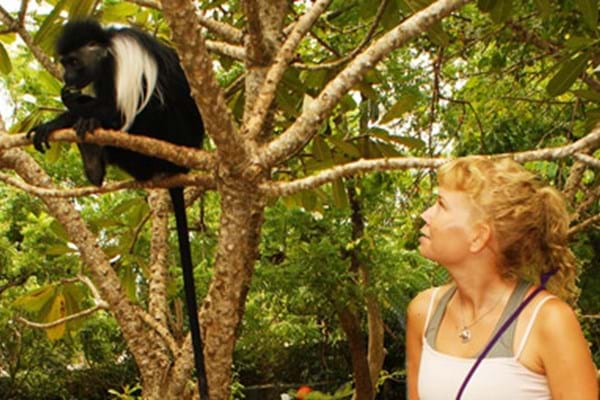