Abbie Brown, Sydney Gregson, Millie Wood, Amy Wigley and Amy Cokayne made their England debuts in front of a 3,000-strong crowd at Stadium Pierre Brisson in Beauvais, France, and then also ran out for the return match at Esher RFC. Despite a tremendous effort, their French counterparts were too strong for them on both occasions.

The Hartpury quintet are all on the Advanced Apprenticeship in Sporting Excellence (AASE) programme in Rugby at the college, and they were all extremely proud to be given the opportunity to represent their country.

Full-back Sydney, 18, said: “It was an amazing experience and such an honour to play for England. I really enjoyed playing with all of the other girls from Hartpury, and hopefully we will all get the chance again. “

Millie, 18, who plays on the wing, said: “It was such a special moment, especially when it came to singing the national anthem. I will never forget that.”

The girls met up with the rest of the squad for preparation the day before the games, and they found the transition from training at Hartpury to training with the England squad extremely smooth.

Second row, Amy Wigley, 18, said: “I think we all felt better prepared than some of the other girls at the training camp, and that is because our level of training at Hartpury is of such an extremely high standard.”

Hooker Amy Cokayne, 17, is actually from New Zealand, but recently moved to Hartpury to pursue her rugby ambitions. She said: “We train hard at Hartpury, everyone is working to be the very best and with such a structured timetable, you are always focused.”

The girls were also quick to praise the quality of coaching they have received, which has helped them to achieve international honours.

Centre Abbie, 17, said: “All of the coaches have been so good - from analysing our performances to pushing us to strive for our best at every session. We definitely owe a lot to them.”

Peter Cook, Head Coach of Women’s AASE Rugby at Hartpury, said: “It is outstanding to see so many girls on the programme achieving England honours, and their success is a reflection of their perpetual hard work throughout their time at Hartpury. I am extremely proud of them, and I’m sure their parents are too.”

The five girls will now look to build upon their England experience and use it for Hartpury’s gain as they focus their attention on the major divisional fixtures as the season reaches its climax. They will then have the opportunity to push for re-selection, with trials for England Under-20s taking place this May. 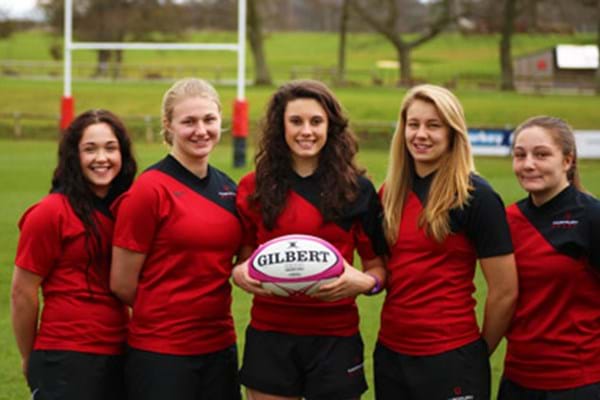