Hartpury fell to an agonising penalty shoot-out defeat at the hands of rivals Loughborough in the BUCS quarter-final yesterday.

Hartpury had produced an outstanding display to seemingly take control of the contest but a fantastic free-kick from Loughborough just one minute from time took the game into extra-time.

Spurred by the equaliser, the away side kicked on to take the victory in a tense penalty shoot-out.

From the outset, Hartpury created the lion’s share of the chances. Centre midfielder Matt Liddiard, who had a fantastic game, was thwarted on several occasions by the Loughborough keeper, while efforts from Jake Parrott and Scott Wilson were also saved.

With Loughborough content to keep possession, they rarely threatened the goal of Louie Barnfather in the first half, but they did go close on the stroke of half-time. An effort from Loughborough’s striker had trickled past Barnfather and was heading in until captain Matt Roome made a vital clearance.

The second half began much like the first; with Hartpury in the ascendency. Parrott saw a free-kick whistle just past the post, while Liddiard saw a header saved. Loughborough then began to step up their game and Barnfather had to produce a fantastic save to prevent a swerving strike from 25 yards rippling into the top corner.

With Barnfather having to make yet another save just minutes later, Loughborough were beginning to turn the screw but it was then that Hartpury wrested back the initiative.

On 70 minutes, a long ball from Saul Halpin saw winger Dan Holloway spring the offside trap and produce a dipping left-footed half volley which flew over the keeper and into the net.

But with Hartpury looking composed across the whole team and a semi-final place looking firmly within their grasp, disaster struck.

With just one minute to go, a foul conceded by Roome 30 yards away from goal would not have appeared overly dangerous, but so it proved. A sublime strike from the Loughborough forward left Barnfather with no chance, and Loughborough were on cloud nine.

The extra-time period saw a nervous Hartpury try and recover from the stunning equaliser, while Loughborough were visibly buoyed and now looking for a killer blow. With only one notable chance for substitute Mike Opoku, who dragged his shot wide, the game inevitably headed into penalties.

Unfortunately for Hartpury, Parrott saw his effort saved onto the post, while Loughborough scored to immediately put pressure on Hartpury’s second penalty. Jamie Edge then stepped up but dragged his penalty wide, with Loughborough again scoring. With a massive amount of pressure placed on Adam Mann’s shoulders, he could only watch in despair as his spot-kick sailed over the bar.

Loughborough could have wrapped things up with their next effort, but Barnfarther made the stop to keep Hartpury alive. Centre half Matt Williams dispatched his effort, ensuring that Loughborough had to score to win the tie. They did just that, with a coolly-taken penalty, leaving the Hartpury squad devastated and Loughborough on their way to a semi-final place. 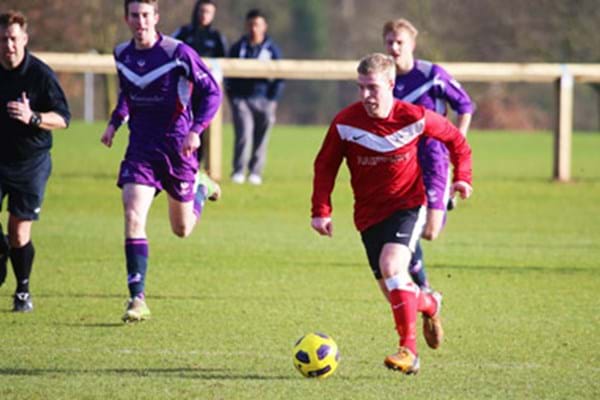