Four tries in a devastating first half display ensured that Hartpury College RFC maintained their grip on the league as the leaders overcame a resilient Dings Crusaders 29-22.

Hartpury attacked with pace and intensity from the outset and Chris Fortey (pictured, top) touched down from a driving maul to open the scoring on five minutes. Craig Jackson converted.

Dings quickly clawed a score back as Steve Plummer weaved his way through from a tapped penalty before Dave Wheeler crossed out wide.

But more impressive phase play from Hartpury saw the hosts increase their advantage through fly half Gareth Thompson, who dived over on the left after juggling with the ball.

The College continued to pile forward and Mike Luxton (pictured, bottom) sealed the bonus point on the half-hour mark when he scored out wide.

Dings refused to lie down, however, and Joe Dancer benefitted from a catch-and-drive to notch their second try before the break, improved by Mark Woodrow.

Hartpury had opportunities to pull clear after the restart, but balls went to ground as Dings improved defensively.

The Crusaders capitalised as Sam Cox punched through the middle to set the platform for Rhys Luckwell’s converted try.

The match was not over, however, with James Gibbons sin-binned for failing to retreat from a penalty and Dings opting for one last attack from a scrum.

The Bristolians almost snatched at least another bonus point through Oli Reyland in the corner, only for the final pass to drift into touch and allow Hartpury to clear their lines.

Hartpury would like to thank Dings for an excellent match and wish them well for the rest of the season.

Hartpury’s next match is away at Shelford on Saturday 8th March. 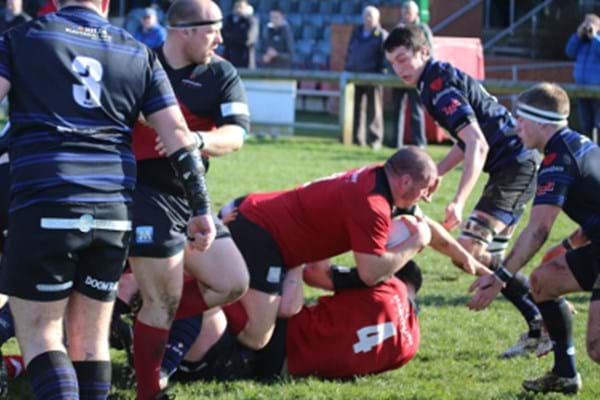