Hartpury’s netballers were jumping with joy after hitting more than a half-century of goals to cruise into the British Colleges Sport semi-finals.

Despite going five weeks without a full netball game in the run-up to their home clash with Bilborough College from Nottingham, they were in devastating form as they racked up a 54-10 quarter-final win.

The defending champions now face a tough semi-final appointment with Greenhead College, who won the National Schools Championships last weekend. Hartpury finished in eighth spot in that competition after being hit by a devastating injury to key defender, Wales’ Meg Powell, only four minutes into that first game.

“We’re bursting with fitness, speed and strength and we’re determined to defend our National Cup title [they beat Aquinas College from Stockport in the final last season].

“It was great to see the team pull such a great performance out of the bag against Bilborough and take such comprehensive control after a difficult National Schools competition at the weekend.”

The first quarter of their last eight clash with Bilborough saw the visitors fail to score a single goal for almost 10 minutes due to concrete defence from vice-captain Thea Thompson, court captain Izzy Dunsford and Rebecca Gwilliam on Bilborough’s centre passes.

Their quick feet and reactions on to the ball were faultless and they soon got the rewards with multiple interceptions.

Taryn Lawrence at wing attack was as consistent as ever. Her speed and agility teamed with impeccable timing ensured the ball passed quickly through the centre third and left Bilborough’s players rooted to the spot. In the shooting circle, Paige Reed and Erin Howell balanced space and created a headache for their defenders, moving constantly and creating confusion.

Unfortunately, Howell had to come off early on due to illness and was replaced by first year Elly Milner. Milner worked well with Reed in a fast-paced game. Reed sunk shot after shot, including a 100% round in the final quarter with 85% accuracy and contributing to 41 goals.

Kellie Hull and Gwilliam in the defence circle put pressure on Bilborough’s passes throughout. The defence was bursting with switches, five foot marks and flying interceptions. The agile Thompson made five interceptions in three quarters and Helen Barr, made an impressive first team debut at wing defence for the final quarter.

Hannah Pegrum did a great job at wing attack in the third quarter, making dynamic moves to the circle edge to support the shooters. Dunsford was also unrelenting with rapid passes and movements. 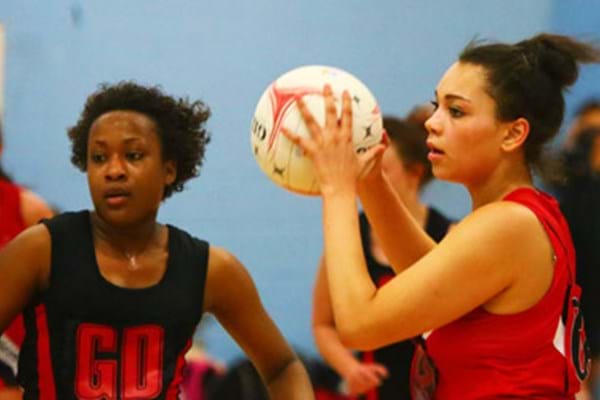