Hartpury students Josh Poole, 19, and Danny Haile, 17, have become the first pair from the same college to captain the England Colleges side.

The duo captained successive games for the representative side with Danny taking the armband for a 3-2 win over the Australian Schools side before Josh skippered the team and scored in a 1-1 draw in the first leg of the Anglo-Welsh cup.

“I didn’t expect to be captain so being handed the armband was an amazing feeling,” Danny said.

“It was really exciting and to line up for your country and hear the national anthem being sung is something special that I’ll never forget.”

Josh, a BSc Sports Business Management student, added: “. I played 45 minutes in my first game, which was brilliant, but to get the honour of starting was even better. Then being made captain in only my second game topped it all off.

“It’s unbelievable that we were both given the honour of being captain It helps to highlight to good work the college is doing with players at our level. I never expected to be playing for England Colleges when I started at Hartpury so it was a bit of a surprise but I was obviously so happy to get the chance.

“I’ve definitely improved as a player since being here. The coaches here have been able to help me with my confidence and composure on the ball – and it’s obviously paid off with the selection for England Colleges.”

The pair were partnered at centre back for 45 minutes in the first game, keeping a clean sheet in the second half as they helped England to a 3-2 win over Australia.

Danny recently returned from a trip to Rome with the squad where he was involved in three matches, beating San Marino 1-0 before losing narrowly to Italy and Malta.

“It’s been a great opportunity for me to experience football in a different culture and to understand and come up against different styles of football,” he said.

“The type of football out there is a lot different from England but it’s a very high standard so it was an amazing experience.”

The 17-year old is currently plying his trade at League Two side Bristol Rovers as part of their academy set-up after working his way through the teams at Hartpury.

He added: “Since joining Hartpury, I’ve worked my way through from the third team to being a regular for the first team and it’ has all been down to the coaching. The strength and conditioning programme has also helped me develop a lot.

“I’m working hard to do my best at Rovers as well, trying to learn as much as I can, but also continuing to try and develop here and continue my education.”.

The pair will be hoping to get one up on their Welsh counterparts early next month as they take part in the second leg of the Anglo-Welsh cup.

Josh and Danny’s coach, Paul Tassell – Hartpury’s junior football manager – said: “It is great to have two England Colleges captains this year and it shows the culture and whole player approach we have within the elite football programme here at Hartpury.” 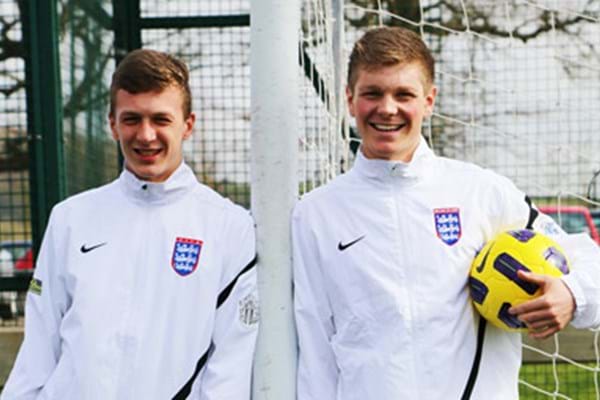