The hosts made the most of three Hartpury yellow cards in the first half to establish an 11-point advantage at the break.

Craig Jackson was dismissed shortly after the interval following his second yellow, and Canterbury held off a spirited Hartpury fight-back to seal victory.

Two Tom Best penalties gave Canterbury an early six-point lead either side of Will Waldron’s sin-binning for Hartpury.

Gareth Thompson’s boot halved the deficit before Mike Luxton finished a superb team effort to edge the visitors in front.

With Waldron poised to return to the field, referee Veryan Boscawen handed Jackson his first set of marching orders.

Matters worsened for the College when Terry Fanolua joined Jackson for taking out Best off the ball, an offence that Boscawen also deemed worthy of a penalty try.

Thompson kicked a second penalty to keep Hartpury in touch, only for Martyn Beaumont’s break to release Tom Rogers for a seven-pointer.

The away side’s scrum was dominant and a penalty at the set-piece granted Thompson three more points.

Hartpury looked in trouble when Best wriggled over in the corner on half-time, but quick-fire tries after the restart from Waldron and Steve Leonard hauled them back into contention.

Hartpury, carrying some tired legs after their BUCS Championship triumph at Twickenham on Friday night, surprisingly had almost all the ball for the remaining half-an-hour as they fought bravely to salvage an unlikely result.

They struggled to break down a resolute Canterbury defence even after Tom Sherson’s yellow card for a high tackle, but Will Tanner eventually barged over for an all-important fourth try that reduced the arrears to a single point (pictured).

There was to be no miraculous comeback, though, as Kwaku Asiedu drifted in off his wing to glide over under the posts with five minutes remaining.

Still Hartpury piled forward, desperate to reposition themselves in losing bonus point territory, but the City Club added insult to injury when Beaumont intercepted 10 metres from his own try line to run the length in the final act.

Hartpury would like to thank Canterbury for their excellent hospitality and wish them well for the rest of the season.

Hartpury’s next match is at away at London Irish Wild Geese on Saturday 5th April.

The U18 1st XV can claim the Hartpury Rugby Academy’s second trophy of the season on Wednesday 2nd April when they take on Prince Henry’s Grammar School in the AASE League Championship Final at Saracens’ Allianz Park stadium. All support would be greatly appreciated as the boys look to win the title for a fifth consecutive year. KO TBC. 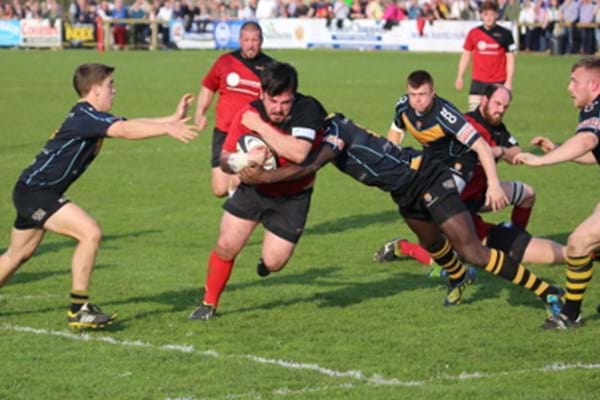