Everyone knows Hartpury for its sporting credentials as a production line for rugby and football talent, and now its reputation for producing golfers who can mix it with the best is rapidly growing.

Hartpury’s elite golf programme has nurtured a special talent currently making waves in the Atlantic, with Ryan Pope showcasing the ability that has made him one of Britain’s most exciting golfers.

Having spent two years with Hartpury Golf, Ryan is now in his first year of a four-year scholarship with American NCAA Division One University South Alabama, where he is a part of the successful Alabama Jaguars golf programme.

While he was at Hartpury studying the Level 3 Extended Diploma in Sport (Performance and Excellence in Golf), Pope was crowned national champion of the Intercollegiate Tour in 2012, shooting seven under par to win by three shots.

And while the former student has now ventured across the pond, success continues to come his way. He played a key role in helping the Jaguars to capture the Samford Intercollegiate Championship - the first championship secured by their golf programme since 2011.

Pope led the way with a two under par round of 70, and head coach Ben Hannan was delighted to see the freshman begin to shoot the rounds that he is capable of. His success has certainly come as no surprise to Richard King, Golf Manager at Hartpury College, who oversaw Ryan’s rise to prominence.

Rich said: “He’s doing very well out there, and everyone at Hartpury is proud. He’s worked really hard over in the US, especially in the gym, and it is starting to pay dividends in his game.

“I truly believe that if he continues the way he is going, he could certainly get on to either the European or PGA Tour.

“He has the right attitude, and with the further coaching he is receiving at Alabama, providing he stays focused, there is every possibility that he could make it. He needs to continue his development but he has the potential.”

A consistent performer, Pope regularly challenged for titles across all college competitions, and he passed his BTEC Diploma with distinction grades.

With Pope starring in the States, King’s attention now turns to the latest batch of golfers currently on the Hartpury production line.

“The golfers are performing well this year, and we are competing on all fronts. It is a testament to our coaches and our programme that we can still deliver success even when players like Ryan have moved on,” added King.

“We have players here now who are looking to emulate the success that Ryan has had here, and I think that with hard work and focus on the mental aspects of their game, they could do just that.” 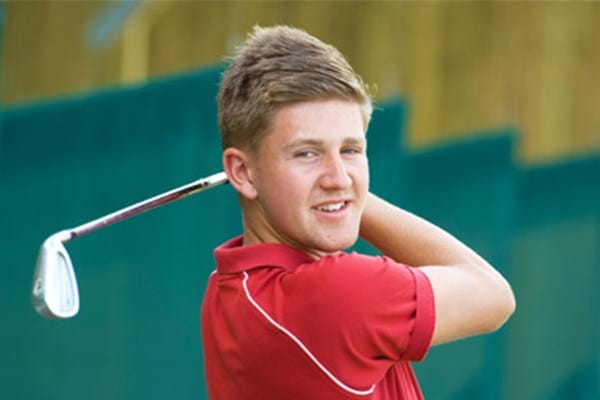