Hartpury’s golfers kicked off the second half of the college season with a top three finish in the British Colleges Open Championships at the historic Fairmont St Andrew’s course.

BTEC Level 3 Diploma Golf students Jacob Tinsley, Tom Sloman and Matt Aston combined to end day one in second place after counting scores of 73, 76 and 79 on the tough par 72 Torrance course, putting them eight shots off the lead.

Rhys Evans chipped in with a five over par 76 in the second round on the Kittocks course to join a 73 from Sloman and a 77 from Aston as the three counting scores for the second round.

The foursome were unlucky not to have finished higher, losing out on second spot as a countback on the final 18-hole scores pushed them into third.

Sloman was also unlucky to miss out on a top three spot in the individual competition after finishing only three shots behind the winner.

Hartpury’s Golf Manager, Rich King, was pleased with a solid start to the year. He said: “I’m hoping this good result will set the benchmark for the rest of the year. The lads played really well and it will help us to put down a marker with some big competitions still to come.” 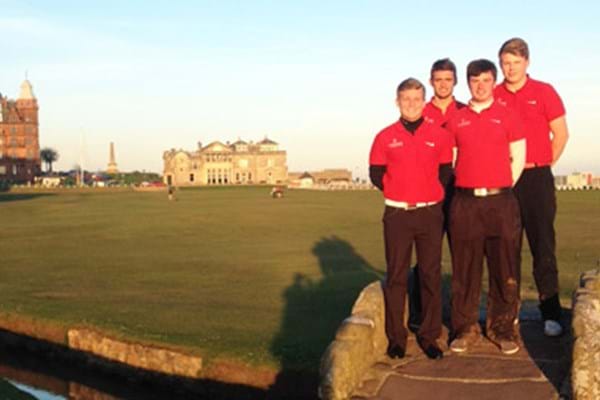