Hartpury College were promoted to National Division One after a thrilling 39-30 victory over closest challengers Ampthill.

Their visitors from Bedfordshire did their best to spoil the party and were only two points adrift with a quarter-of-an-hour to play.

But a quick-fire double from wingers Steph Reynolds and Jaike Carter ensured that Hartpury will play third-tier rugby for the first time in their history next season.

In a rip-roaring first quarter, Ross Moriarty broke the deadlock when he crashed over out wide following Steve Leonard’s strong carry, with Billy Burns converting.

From the subsequent kickoff, flanker Tom Ailes raced away and his sliced kick bounced kindly for Reynolds to grab his first in the corner.

Ampthill opened their account courtesy of a penalty from Elliot Clements-Hill, who was then on hand to convert Matt Burke’s five-pointer off a driving maul.

Burns and Clements-Hill exchanged penalties shortly before the interval to maintain the two-point gap between the sides.

Hartpury were quick out of the blocks after the restart and centre George Boulton danced his way through to score the first try of the second period, which Craig Jackson improved as Burns struggled with a groin injury.

Burke produced a carbon copy of his first effort to keep the visitors in touch, while Jackson and Clements-Hill traded tee shots as the game remained on a knife-edge.

Reynolds burst through off a scrum to rack up the bonus point for Hartpury and the contest’s turning point swiftly followed.

With Ampthill attacking deep inside Hartpury territory, referee Phillip Davies awarded them a penalty in front of the posts.

Trailing 32-23 with over 10 minutes remaining, the away side somewhat surprisingly opted to go for the lineout in the corner.

And it proved a crucial moment as Hartpury stole the ball before breaking the length of the field through Burns, Ben Vellacott and Leonard, with Carter providing the finishing touch to all but seal the result.

Ampthill refused to roll over and James Wright crossed under the posts shortly afterwards, but Hartpury were not to be denied as the National Two South title confirmed an eighth promotion in their 10-year existence.

The win also sealed a unique ‘Treble’ for the College this season after triumphs in the BUCS and U18 AASE League Championships over the past fortnight, leaving director of rugby Alan Martinovic beaming.

“For a number of years now, it’s been a goal for Hartpury College to attain National One status,” he explained.

“To be part of that group that has attained that goal is deeply satisfying.

“This has been an absolutely fantastic season. That’s not just the achievements today, but also our wins in the BUCS competition and the U18 AASE League, which I think can be described as a very unique achievement.

“I’m absolutely delighted to have been a part of that and it’s been a pleasure to lead it.”

Hartpury would like to thank Ampthill for an excellent match and wish them well for the rest of the season.

Hartpury’s next match is away at Exmouth on Saturday 19th April. 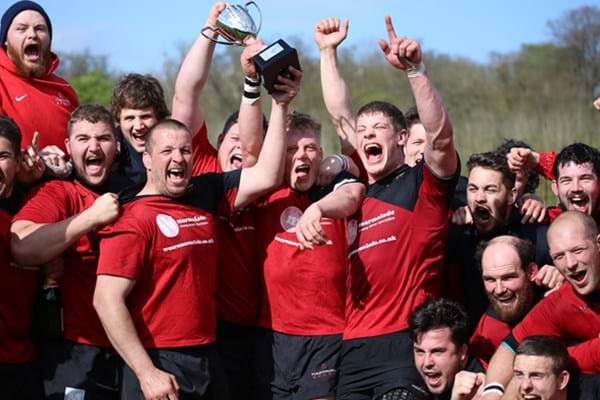