Hartpury College RFC concluded their season with a 31-21 loss at Bishop’s Stortford, who leapfrogged Canterbury into third place in their maiden campaign in the fourth tier.

The lead was short-lived as the Stortford pack rumbled over from a catch-and-drive, with Stephen Ball claiming the try that Tom Coleman duly improved.

Hartpury restored their advantage courtesy of a penalty try after the hosts collapsed a series of mauls deep inside their own 22.

But Stortford were defiant and Jonny Neville reduced the arrears to two points as he finished a flowing team score, before fullback Nic Hankin weaved his way through for a fine solo effort converted by Coleman.

The see-saw battle continued and Carter bagged a second out wide (pictured) after Stortford lost possession in a dangerous area, with Burns’ third conversion giving the college a narrow lead at the break.

The hosts began the second half strongly and profited from a mass brawl as the officials singled out Will Tanner, who had only replaced Chris Fortey seconds earlier, for a yellow card.

Stortford made the visitors pay immediately as their scrum drove their depleted counterparts back, earning a penalty try that secured the bonus point.

Hartpury had chances to haul themselves back into the game, but they failed to capitalise on their opportunities in the face of an unyielding home defence.

And a breakaway score from centre Neville, who found himself in acres of space from Coleman’s crossfield kick after Hankin had kicked through all the way from their own try line, sealed the win five minutes from time.

While disappointing for the team to end the season with a defeat, the result was ultimately academic and Hartpury took the plaudits after the game as the RFU presented captain Fortey with the National Two South trophy.

Hartpury would like to thank Bishop’s Stortford for their excellent hospitality and wish them well for next season.

Hartpury would also like to thank all of our supporters and sponsors for your tremendous contribution to what has been an unforgettable season. We look forward to you joining us for the journey as we make the big step up into National One next season. 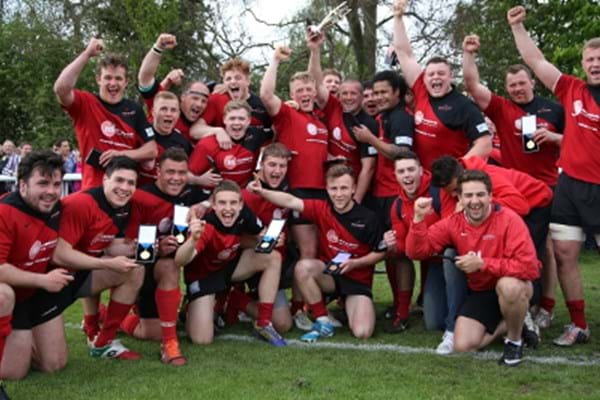