Despite playing into a brisk wind blowing off the adjacent English Channel, the hosts started the stronger and Richard Cadywould kicked the first points on seven minutes.

Hartpury scrum half Ben Vellacott sliced through the middle for a fine individual try six minutes later, only for Exmouth to strike back immediately when Alex Brown intercepted a chip kick and raced home unopposed, with Cadywould converting.

Will Tanner touched down from a catch-and-drive for the College and Gareth Thompson added the extras, but the see-saw battle continued as Vellacott was sin-binned for a deliberate knock-on and Cadywould kicked the subsequent penalty.

Even though they had trailed for much of the half, Hartpury went in at half time with a 19-13 lead as good phase play resulted in Thompson burrowing over on the whistle for another seven-pointer.

Exmouth needed a fast start to the second half with Hartpury building momentum, and Richard Bright’s try from a Brown crossfield kick was the perfect answer.

But they were equally quick to surrender their advantage and Hartpury’s 18-year-old winger Sam Westcott, drafted in from the College’s AASE League-winning team, glided through for a superb solo effort (pictured, top) that Thompson improved.

Ross Morshead then dotted down from a driving maul as Exmouth reduced the arrears to a single point, but Leonard duly broke through four minutes later to feed Jaike Carter for Hartpury’s fifth try, with Thompson on-target again from the tee.

With the game now resembling basketball, Brown crashed into the line to score under the posts and Cadywould converted, seconds before Hartpury prop Jimmy Litchfield (pictured, below) powered over from close-range for yet another seven points.

And Hartpury finally won the tiebreaker when Leonard burst through the middle for the game’s 11th and final try eight minutes from time.

Hartpury would like to thank Exmouth for their excellent hospitality and wish them well for the rest of the season.

Hartpury’s next and final match of the season is away at Bishop’s Stortford on Saturday 26th April. 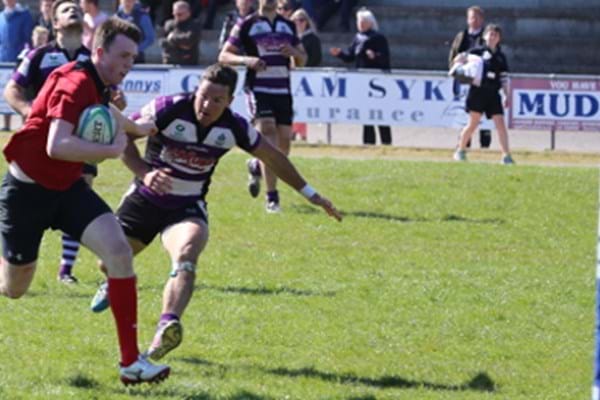