The Wild Geese, playing at their famous Sunbury home for the final time, enjoyed the early pressure and hooker Scott Tolmie powered over for the first try.

The visitors went in front when Thompson converted Will Waldron’s try from a driving lineout.

Irish were then reduced to 14 men as referee Luke Haskins sin-binned captain and prop Michael Fraher for repeated infringements in the scrum.

Hartpury took advantage and Thompson broke clear to set up winger Mark Harrison with a perfectly weighted kick, before adding the conversion and a penalty shortly afterwards.

But Irish hit back ahead of the interval as Tom Fowlie released Fred Berridge in the corner, with Oscar Thomas slotting the extras.

The home side’s momentum continued after the restart and some fine offloading and phase play resulted in Gerard Ellis restoring parity early in the second period.

Harrison pounced on a loose ball to race home from halfway and complete a brace, but Irish levelled again when a deflected kick bounced kindly for Fowlie.

Thompson and Thomas exchanged penalties as the final quarter approached and the tension was palpable around the old ground.

And it was the Wild Geese who seemed to have struck the fatal blow as referee Haskins both sin-binned Harrison and awarded a penalty try for impeding Tolmie as he chased a kick just nine minutes from time.

Hartpury continued to press, however, and they quickly worked their way back into opposition territory.

The College’s scrum had been dominant throughout and hammered away on the Wild Geese five-metre line in the dying minutes, with Haskins awarding penalty after penalty before sin-binning prop Charlie Connor.

Still the hosts transgressed, though, and Haskins was eventually left with no option but to signal another penalty try.

Then, in the most dramatic of finishes, Haskins penalised Tolmie on Irish’s 10-metre line and set the stage for Thompson to send his teammates into raptures.

Hartpury would like to thank London Irish Wild Geese for their excellent hospitality and wish them well for the rest of the season.

Hartpury’s next match is at home to Ampthill on Saturday 12th April. The bottom line is simple – if Hartpury win, they will win the league and be promoted to National Division One. Ampthill have won nine out of their last 10 matches and have very realistic promotion ambitions of their own, having brushed aside Canterbury 41-8 at the weekend to leapfrog the Kent club into second place. The boys need all your support and this will be a cracker of a match that you do not want to miss – KO 2.30pm. 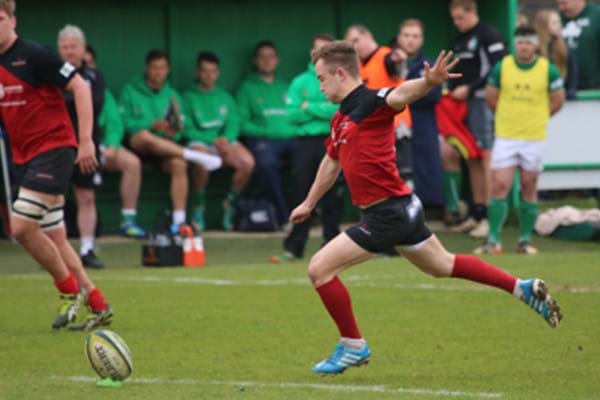