Paralympian Mel Nicholls continued her preparations for Rio 2016 by taking a gold medal at the 2014 British Elite Paraduathlon Championships.

Former Hartpury student Mel, who is now a Sports Ambassador for the College, was in exceptional form at the Rockingham Motor Speedway Circuit with an overall time that would also have placed her fourth in the men’s category.

This was despite an early scare where the Great Britain wheelchair racer was involved in a high speed crash, rolling her racing chair.

Undeterred, the 1500 metres World Record holder went on to become the Tri1 Women British Paraduathlon Champion - perfect preparation for her track season ahead.

Mel said: “I’m really happy with my performance and winning gold in my duathlon debut. It was a good speed stamina test over the two disciplines and three elements and I am especially pleased with my times for the racing chair phases, my final leg being on a par with the lead Tri1 Male.

“I'm confident I would have kept with the boys for the first 5k had I not rolled my racing chair and lost a good five minutes before being able to continue. I have recently raced in my first 10km road race and half marathon successfully, which stood me in good stead for this competition.

“Unfortunately, my race chair, Dolly, took a lot of damage from the accident and I suffered some cuts and bruises too, but once I realised what had happened, my stubbornness took over and adrenaline really kicked in and I managed to get myself back upright, in the chair and back in the race.

“I was not going to throw this chance away so I blocked out the pain and used my anger of crashing to chase down the rest of the field, despite my chair being damaged.

“Thankfully, while I was on my handbike leg, my coach was able to get Dolly’s wheels moving freely again that had been pressed down by the crash and I was able to complete the final leg.”

In the competition, Mel was up against multiple Paralympic gold medal-winning Baroness Tanni Grey-Thompson DBE.

Mel added: “All of my training, and events like this, are geared towards competing at Rio 2016, and I am really looking forward to stepping up my preparations as the Games get closer.” 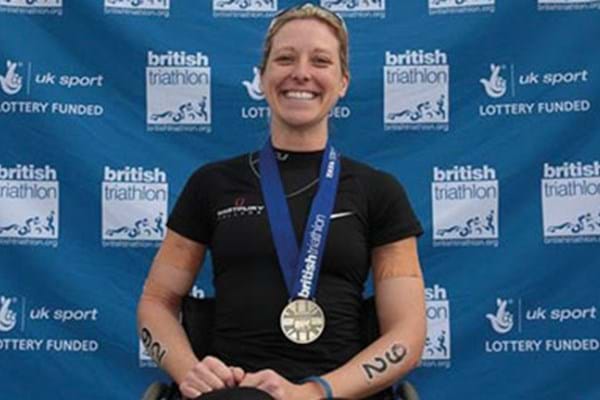