Prince Henry’s, Leeds’ AASE side, enjoyed their best spell of the game following Westcott’s second three-pointer, but they struggled to make inroads into an unyielding red defensive wall.

And it was Hartpury who grabbed the first try against the run of play as they spun the ball left following Mark Harrison’s big break to release Westcott in the corner six minutes before half time.

Hartpury stormed out of the blocks in the after the restart and Mat Protheroe swiftly added a second try with a stunning solo effort only 45 seconds into the period.

After Prince Henry’s dropped the ball in the middle of a threatening counter-attack, Hartpury moved the ball into space and Protheroe scorched through from 70 metres, sidestepping the last defender beautifully for a score improved by Westcott.

The fly-half was involved again as Hartpury added to their tally five minutes later courtesy of Harrison, who crossed on the right following Protheroe’s half-break.

Westcott slotted a penalty to take a rampant Hartpury further clear, before Protheroe all but sealed victory as he intercepted a wayward Prince Henry’s pass 10 metres from his own try line and raced home for seven more points.

Tom Griffiths glided over with 12 minutes remaining as huge carries from Kai Little and George Edgson tore into Prince Henry’s once more.

The Yorkshiremen were then reduced to 14 men for the remainder of the game as the referee sin-binned hooker Jack Walker for killing the ball.

Prince Henry’s kept coming and Sam Allan grabbed a late consolation try out wide, but it made little difference as Hartpury emerged victorious.

With the BUCS and AASE titles now secured, Hartpury College RFC will be looking to make it an unprecedented treble for the college as they enter the final four games of the National Two South season top of the league. Their next game is away at London Irish Wild Geese on Saturday, 5th April. 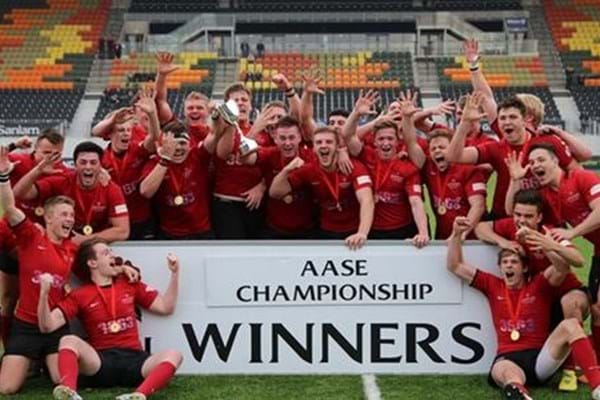