With international honours, Superleague signings and competition success under their belts, Hartpury’s netballers can look back on a successful campaign.

Earlier this week, a trio of girls on Hartpury’s netball programme starred for the British Colleges (BCS) national representative side against Wales Under-19s in a Superleague match curtain-raiser. They were Thea Thompson, Erin Howell and Kellie Hull. Hartpury’s Izzy Dunsford also played for Wales.

Last weekend, the Under-19s finished runners-up in the BCS National Championships at the University of Bath, losing out 22-14 in the final to in-form Greenhead College – the same team that edged them out by a point in the BCS National Cup semi-final the previous week and the winners of the National Schools tournament.

En route to the final, they defeated South East winners Farnborough 6th Form College, with shooters Elly Milner and Howell sinking five from five in the closing minutes to win 23-18.

In their final group game, they defeated North West winners Aquinas College 32-12, who they also beat to take the National Cup last year, and the impressive Milner finished with her highest shooting percentage of 86%.

As winners of group B, Hartpury then crushed Truro College 30-10 in the semi-finals on the Sunday before coming unstuck against this season’s bogey side, Greenhead.

They were without Paige Reed, who had been released to play for Team Bath on the request of the England management team, and Megan Powell – who was selected for Wales this season but was struck down by a serious injury in the first game of the National Schools.

Hartpury netball manager, Sarah Pretty, said: “I’m hugely proud of the whole squad for their achievements this season, but even more for their individual progression and development.

“Finishing runners-up to Greenhead in two national competitions was hard to take but the standard of play this season was definitely the highest I have ever seen on the college circuit.

“The girls have had plenty to celebrate - winning the county and regional round of the England National Schools and making it to national finals and semi-finals – and on an individual level too.

“We’ve had Megan Powell and Izzy Dunsford selected for Wales and Paige Reed picked for the England Under-19s Potential Squad at the age of only 16, as well as three girls selected from 150 hopefuls for the British Colleges national squad.” 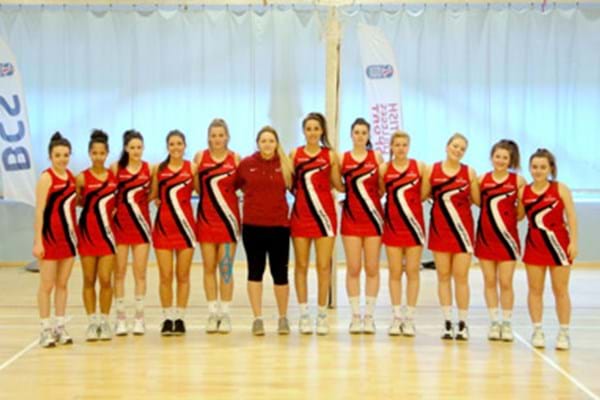