A-level student Charlotte Hodgkins-Byrne, 17, and Gloucester-Hartpury AASE rower Flo Pickles, 17, who is from Cheltenham, will represent the Great Britain junior team at one of the largest junior regattas in the world next month.

The pair successfully trialled for the women’s quad team during a five-day camp in Nottingham, which was used specifically to pick a team for the regatta in May.

Hartpury’s rowing coach, Tom Pattichis, said: “It’s brilliant to see two of our rowers included in the team for Munich as, although not a guarantee of a final place in the summer, it’s a great indication for the two girls that they are on exactly the right track. They are both in great form and we look forward to seeing what they can do with the national team in the future.”

The regatta comprises Juniors B and A and is an important step in the selection processes of many national rowing teams like Austria, Croatia, Germany, Great Britain, Poland, and Switzerland. More than 700 junior rowers from Europe and Africa will compete.

Shortly after finding out about their successful selection, Charlotte and Flo jetted straight to Belgium where the rest of the Hartpury-Gloucester crew are currently based for some pre-season training with the regatta season fast approaching.

The squad spent a week at Hazewinkel lake and also took part in Ghent International Regatta en route back to the UK. Mathilda Hodgkins-Byrne continued her preparation for upcoming GB Under-23 selection trials by recording a win in the women’s Under-23 single category, beating opposition from Belgium, Holland and Germany. Flo and Charlotte also continued their good form, coming 1st and 3rd in the women’s Under-18 single. 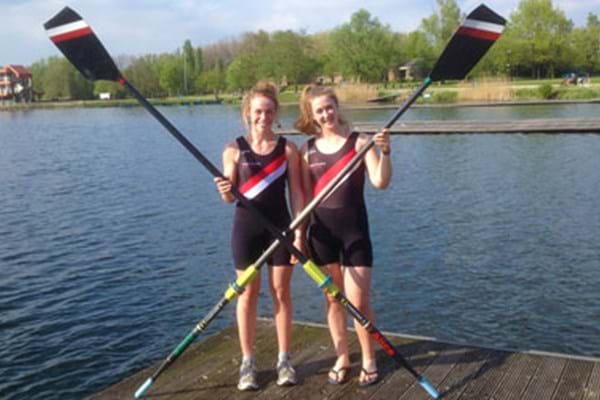