Former Hartpury student Abdul Majeed Waris has his sights firmly set on this year’s World Cup after rediscovering his best form on loan with French side Valenciennes.

The Ghanaian striker, who has scored three goals in six games for the Black Stars, will be hoping to secure his seat on the plane to Brazil after a good run of form since moving on loan from Russian side Spartak Moscow.

Having netted eight times in 11 games for the Ligue 1 side, Waris is rumoured to be keen to extend his time with the French outfit after his deal runs out in May.

Hartpury’s Director of Football, Tom Radcliffe, who used to coach Waris, said: “To see a Hartpury lad playing in the World Cup finals would be amazing. The programme we run here has already produced international as well Champions and Europa League players, but to have one of them playing on the world’s biggest stage would be something completely different.

“It shows the strength of the programme we have here, that we’ve had players go on to receive international caps and play in the biggest games.”

Several top European sides including Everton and Chelsea were rumoured to have been keen on signing the 22-year-old before he made his move to nine-time Russian Champions Spartak Moscow.

After racking up 26 goals in 55 appearances for the Swedish side, including the Allsvenskan league's first ever five-goal haul, his home nation, Ghana, came calling. The speedy striker made his debut for the Black Stars in 2012 in a game against Chile.

After moving to Spartak, Waris was given more chances with Ghana -notably in their World Cup qualifying campaign where he scored a debut goal in a 4-0 over Sudan. He went on to score three goals in three games, including strikes in 2-1 and 6-1 wins over Zambia and Egypt respectively.

Waris, who scored 36 in 21 games for Hartpury, including a hat-trick in the final of the England Schools National Cup, recently returned to Hartpury to pass on his top tips to our current crop of aspiring players.

Radcliffe added: “It was a real eye opener for some of the boys here to see exactly what it takes to play at the top level, the sacrifices and the hard work that Waris has had to put in during his time with us and since.”

Waris is the latest in a string of Hartpury players, including Matt Smith, Jake Gosling and David Accam, who have signed professional contracts and played at the highest level since leaving Hartpury. 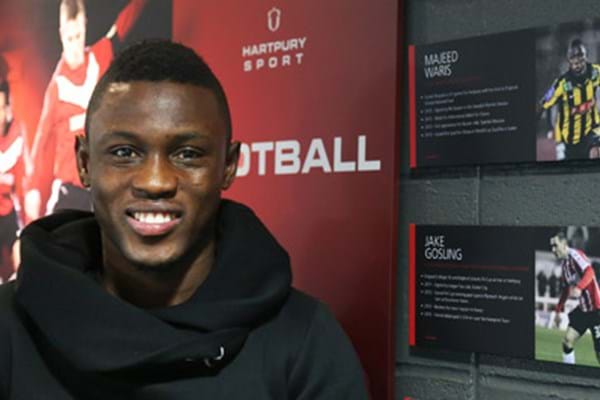