Hartpury’s assistant rowing coach, Will Stockton, took to dry land as he completed a gruelling 440-mile combined run and cycle in aid of charity.

Will said: “The challenge was pretty tough, especially the first two days of running. I covered 80 miles and burnt more than 13,000 calories.

“I had some great support from the staff in the sports academy at Hartpury and also the college rowers before and throughout the challenge.

“The miles of cycling on the canal in Gloucester while I was coaching the rowers definitely contributed to my fitness, along with the four-mile commute to and from work on my bike.”

Will began his challenge in Exeter, travelling through Lyme Regis, Weymouth, Bristol, Oxford, Leicester and Sheffield on his way to finishing in Manchester after a week. He was raising money for SCaRF (a skin cancer research fund) and PAPYRUS, who help in the prevention of young suicide, and Gloucester Boathouse Appeal, to raise funds for a new boathouse.

The next challenge for Will comes in the form of the UK Ironman in Bolton, which takes place in July.

Will added: “I’ll certainly look to organise another fundraiser over the next couple of years! What exactly that will involve I don't know yet, but it will be even tougher and more exciting than this tour.”

You can read more about Will’s challenge and how he got on in his blog at http://www.willontour.co.uk/ 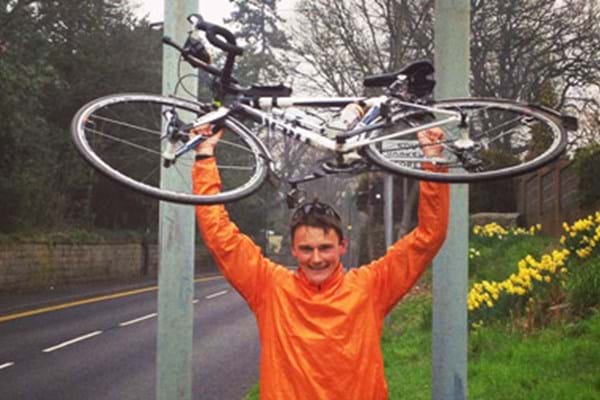