Gloucester-Hartpury AASE rower Flo Pickles continued her excellent season as she made the final of Junior European Championships in Belgium.

The 17-year-old produced an excellent row for Great Britain in her semi-final, overtaking her Serbian counterpart in the final 250m of the race to claim the third and final qualifying spot.

Flo finished fifth overall amongst a very strong field in the final which included rowers from Belarus, France and Russia who claimed the medal places.

The event, as usual, clashed with the national schools regatta where Hartpury also had a strong showing competing.

A boys crew containing Will Kemp, a rower who had only taken up the sport back in September, did brilliantly to make the A final where they finished sixth overall. Kemp, who was identified as part of the GB start programme, was joined by James Bird, Jack Williams and Joe Barnes.

On the girl’s side the Gloucester-Hartpury crew had two crews competing, with both performing well. The A crew, who were defending their title in the women’s quads, were unfortunate to finish third after strong performances in the time-trial and semi-final stages. Having topped both, the quad were squeezed out in the final by two seconds as Marlow Rowing Club and Headington School finished above them.

Hartpury’s rowing coach Tom Pattichis said “obviously we’re disappointed not to have defended our title, but it was a very tight final and it’s definitely all still to play for with Henley coming up in four weeks’ time.

The boys did excellently given their relative inexperience and will continue to train hard in order to qualify for the Henley Royal in July.” 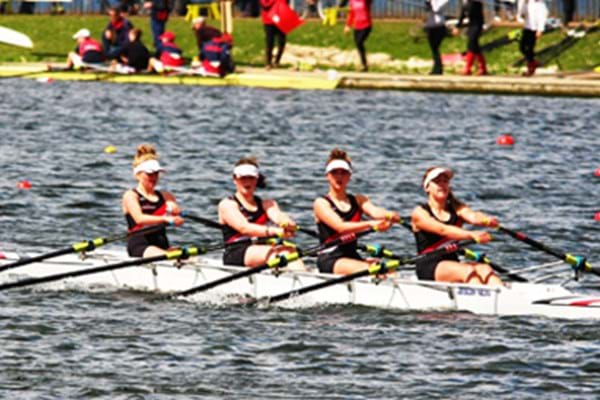