Hartpury scooped another national title as they clinched an English Colleges FA National Championship Play-off final triumph with an extra-time winner in a pulsating encounter.

The college’s junior football side avenged their defeat to Gateshead College in the ECFA National Cup final in style as they saw off their northern adversaries 4-3.

Playing at Premier League Stoke City’s Britannia Stadium, Paul Tassell’s team were jubilant as they won the competition for the fifth time in seven years with a Joe Parker strike deep in the second half of extra-time.

The play-off win sees Hartpury’s junior footballers crowned the best college side in the UK and follows on from their ECFA Premier League title success as well as representative honours for a host of players.

Hartpury settled the quicker of the two teams, with centre midfielder Thomas John weaving his way through two opponents before teeing up Joe Benn, who sent his shot wide.

Hartpury’s early pressure proved their undoing, however, as Gateshead took the lead from a swift counter-attack. A clearance from the back was controlled by the Gateshead winger, who galloped through several challenges and played the ball across goal, with the striker duly rolling it into the net.

Conceding did not deter Hartpury’s attacking mentality, and only a block from a defender prevented John from scoring after a fantastic run by lone striker Jordan Fletcher.

In the 21st minute, John found Nick Hyden in space and the tricky winger powered past the defence before slotting home through the keeper’s legs.

Just five minutes later, a run inside from winger Joe Parker saw him find Fletcher, and the big striker was able to guide the ball beyond the keeper’s reach and into the far corner to put Hartpury in front.

With Josh Poole marshalling the back four with the same authority he has all season, Gateshead were unable to create any clear-cut chances on goal.

In the 37th minute, Hartpury struck again as a corner was headed clear by Gateshead as far as Hyden, who connected on the edge of the box with a first time volley that evaded both Benn & Fletcher and wrong footed the keeper, putting Hartpury 3-1 up.

With half-time approaching however, Gateshead’s dangerous winger jinked past numerous challenges and fed the striker, who was able to turn and smash an unstoppable effort past goalkeeper Harry Ashton.

With Hartpury taking a deserved, albeit slender advantage into the second half, it was no surprise to see a much more nervy and fractious affair after the interval. Hartpury tried to increase their advantage with the tireless Danny Haile pulling the strings in midfield, but the ball kept breaking down in the final third, while Gateshead continued to press hard.

Ashton had to be alert to punch a few corners away from his area, and also had to dive low among a flurry of boots, receiving a kick to the head in the process.

With time running out, Hartpury were hopeful they had survived the onslaught of set pieces but in the final minute of normal time, their defence was undone. Another free kick around the box saw Gateshead pile forward, and when the ball was headed back across the face of the goal, their player was able to loop his effort over Ashton’s head.

Both teams had solid chances in the extra-time period with Hartpury looking the stronger and more likely to win the game. Hartpury left back Lewis Binns let fly with a speculative volley from 30 yards but it cannoned off the crossbar. Then in the second half of extra-time, another headed effort from a Gateshead set piece was denied by the woodwork.

With penalties looming large though, Hartpury were able to make the final breakthrough. In the 111th minute, a cross-field pass from Pat Taylor found its way to Parker, who managed to hold off his man, swivel and fire a shot past the keeper and into the bottom corner. Hartpury held valiantly to their advantage to spark jubilant scenes of celebration among the players, coaches and supporters.

Hartpury junior football coach, Paul Tassell, said: “This performance epitomised our season with the character shown by the squad and they thoroughly deserved the victory. They can now state they are the 'best' in the country and everyone involved with Hartpury is hugely proud of them for achieving the highest accolade in college football.” 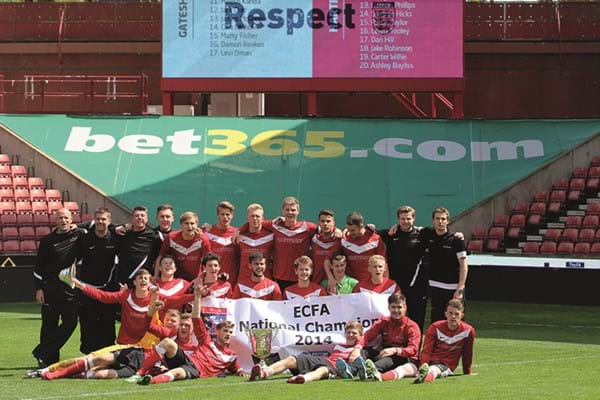