Hartpury’s rowers put their preparations for the National Schools Regatta fully in motion with a strong performance at the London Olympics’ Dorney Lake.

With one of the biggest events in the rowing calendar up in three weeks’ time, this weekend’s Wallingford Regatta gave two Hartpury-Gloucester crews the chance to begin their preparations.

The crew of James Bird, Will Kemp, Joe Barnes and Jack Williams drew a tough first round heat featuring event favourites Sir William Borlase School. Having come second, the crew qualified for the Repecharge, which they won by clear water. In the final, the crew kept pace with the leaders in the first half of the race before finally coming home in fourth.

Hartpury’s rowing coach, Tom Pattichis, said: “These results bode very well for the upcoming season, particularly in the girls’ case with Flo and Charlotte to come back into contention for places in the crew once their GB duties are completed. For the boys it was another strong showing as they continue their build up to the National Schools event.”

The crew took part in the Elite Women’s Quadruple sculls event and won the race comfortably from Headington School in second. The crew now prepare to fly out to Germany on Friday to represent GB at Munich Junior Regatta. 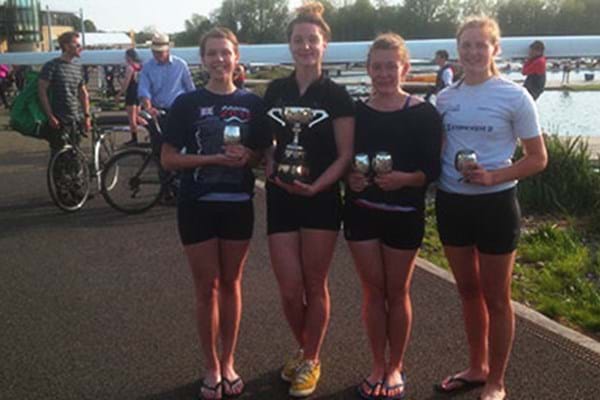