Hartpury football coach Paul Tassell hailed his current Under-19s side ‘the best group of players I’ve ever worked with’ after watching them grab national title glory.

The college’s junior football team claimed a 4-3 victory over Gateshead with an extra-time winner in a thrilling English Colleges FA National Championship Play-off final at Stoke City’s Britannia Stadium.
Earning them the accolade of being the best footballing college in the UK, it was the fifth time Hartpury have won the competition in seven years and also saw them avenge their recent defeat to Gateshead in the ECFA National Cup final.

Hartpury’s Under-19s also finished top of the ECFA Premier League this year, while the centre half duo of Danny Haile and Josh Poole have been called up to, and captained, the England Colleges squad, and nine of their players have also represented Gloucestershire FA.

Tassell said: “This squad thoroughly deserve to be able to state they are the 'best' in the country, having worked tirelessly and completely absorbed themselves in the ethic and the culture we have established here at Hartpury.
“This is the best group of players I have ever worked with and it doesn't surprise me in the least that they have secured the national title. I am hugely proud of them but also the coaching and teaching staff who have guided and supported them with such commitment and passion. That has been key to them achieving the highest accolade in college football.”

Hartpury’s Under-19s had to recover from going a goal behind in the play-off final, hitting back with two goals from Nick Hyden and one from Jordan Fletcher to go 3-1 up before Gateshead struck again to cut the gap to a goal just before half-time.

With time running out, Gateshead sent the game into extra-time and although Hartpury had the better of this period, penalties were looming large before they finally got the breakthrough they needed with a late strike from Joe Parker.

“This performance epitomised our season with the character shown by the squad,” added Tassell.

“We went a goal down early in the game in similar circumstances when we played Gateshead only a couple of weeks ago in the ECFA Premier Cup final but, this time, the players reacted in the right way.

“We played some great football to then go 3-1 up but Gateshead are a very strong team and we knew they would have their spells of pressure. The equaliser in the last five minutes was a sickening blow after all our efforts but we reacted positively to this setback and it was great to see us pushing so hard to win the game in extra-time.

“It was great to see Joe Parker getting the winner. It topped off a great season for him and the team.” 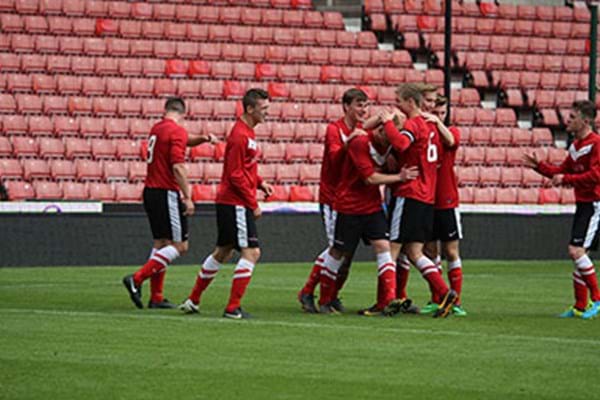