Hartpury were looking to build on their league success this year, having finished top of the ECFA Premier League. Nine of their players have also represented Gloucestershire FA, and the centre half duo of Danny Haile and Josh Poole have been called up to, and captained, the England Colleges squad.

Manager Paul Tassell knows that the best tonic for Wednesday’s cup disappointment would be to emerge triumphant next Wednesday (7th May) when they entertain the Football Academy of Bisham in the ECFA national play-off semi-final.

If they win, the squad will play at Premier League side Stoke City’s home, the Britannia Stadium, on Wednesday, May 14th.

With the ECFA Premier Cup final being held at England’s training base, St George’s Park, Gateshead were quicker to adapt to the slick nature of the surface and with their first attack of the game, they took the lead.

Gateshead’s winger jinked to the byline and his low cross was met by the striker, who made no mistake from six yards, leaving Hartpury goalkeeper Harry Ashton no chance.

With Gateshead retaining possession well, Hartpury struggled to gain a foothold but when they did, they were guilty of missing two clear-cut chances.

Firstly, winger Joe Parker played in lone striker Jordan Fletcher, who saw his effort from close range parried away by the goalkeeper. Then in the 43rd minute, Fletcher saw another effort saved, but when the ball came back to him, he was able to look up and square the ball to the on-rushing Patrick Taylor, who saw his goal-bound effort blocked by a defender.

In the last play of the half, Gateshead doubled their advantage. A long ball from the back was headed out for a corner, and from the resulting play, a Gateshead defender rose highest to head the ball into the roof of the net, leaving Ashton with no chance.

Hartpury started the second half more positively, with Fletcher and midfielder Nick Hyden both threatening. However, only a fantastic clearance off the line by defender Danny Haile prevented Gateshead from extending their lead.

As time began to run out, the team began to take more risks, pushing more men further up the pitch and it almost paid dividends as left back Lewis Binns skipped past multiple challenges to find himself in a shooting position. However, he could only shoot at the keeper, who managed to hold on to the ball. 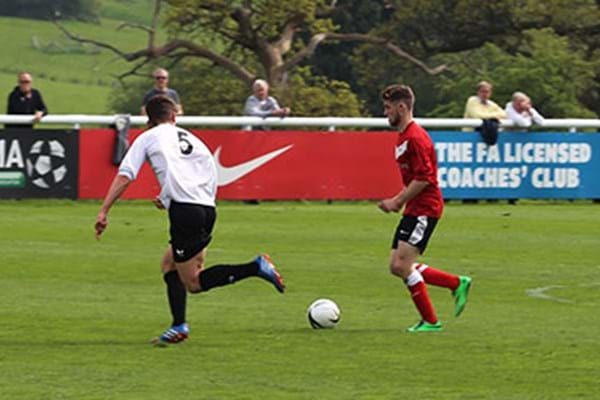