Up and coming dressage star, former Hartpury student Olivia Oakeley, has secured her place at a fifth consecutive European Championships in her final year as an Under-21 rider.

Olivia, 21, who was part of the Equine Academy at Hartpury, will be in a four-strong Great British dressage team at the Young Rider European Championships in Arezzo, Italy next month.

Olivia said: “I am exceedingly happy to be finishing my last year as an Under-21 rider with mine and Rio's fifth consecutive place on the Great British team for the Junior and Young Rider European Championships.

“We have had a fabulous year so far and I am hoping to continue our form into the Championship. As always, mistake free tests and personal bests are the ideal goal. I am aiming to build on last year and finish in the top 10 with scores of over 70%.

“Without the support and facilities I was able to access at Hartpury during my time there as a student, I wouldn't be as far ahead in my training. Nick (Burton) and Carl (Hester) give you incredible support as well as being fantastic people to learn from!”

Olivia and her horse, Donna Summer (Rio), have had an excellent run-up to qualification after finishing up as the top British Young Rider combination in all three tests at the Saumur CDIO in France, where they also picked up a team bronze medal.

The pair also finished just behind Spencer Wilton and Henrietta Andersen in the prestigious Somerford Park Premier League, where they competed in the Prix St George class, securing third place with a score of 70.96%.

The next morning, the talented duo won the Young Rider class by more than 4% with an excellent score of 73.44%, and then up against the senior competitors again in the Intermediare One class later in the day, they secured another third place behind Wilton and Anderson.

Nick Burton, who taught Olivia as part of the equine academy at Hartpury, said: “Olivia always showed huge potential during her time at Hartpury and she is continuing to prove that potential.

“To be selected for five consecutive European Championships at junior and young rider level is a testament to her hard work and how much she developed during her time with us here at Hartpury. Of course, everyone here at the college continues to keep a close eye on her progress and celebrate her successes.” 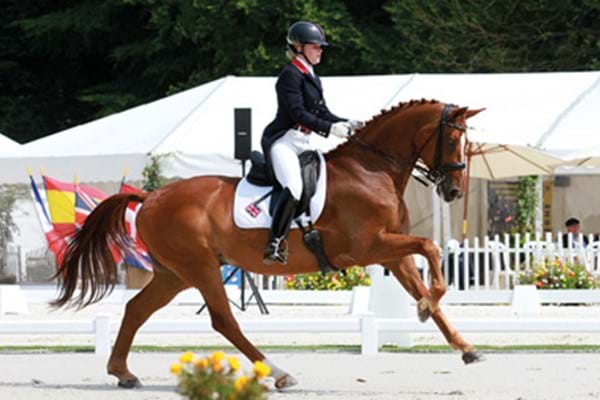