Constance Copestake and her own mare, Aprobanta, led the way on a eventing score of 38.10 to win the national title at Brand Hall, Staffordshire. Four faults in the show jumping were not enough to knock her off the top spot after a faultless cross country round resulted in a final score of 42.10.

The 17-year-old narrowly saw off the challenge of fellow AASE Apprentice Sam Ecroyd and Wodan IV, who also gained four faults in their show jumping round to finish on 42.80. In third spot was Tintin Belsham, who will join the AASE programme at Hartpury next September.

While she is currently studying for her A-level exams in Lincolnshire, she is also completing the Equestrian Advanced Apprenticeship in Sporting Excellence (AASE) - provided by British Dressage and British Eventing and run exclusively by Hartpury.

This long distance learning programme is extremely flexible and is designed to fit in around students’ existing academic commitments or jobs. It enables them to gain the skills and development opportunities to succeed at the very highest level under the expert guidance of mentors who have played a starring role in the equestrian world – as competitors and coaches.

The programme is seen as a stepping stone to prepare the best young riders for the British Equestrian Federation Excel and world class performance programmes. Riders are supported to apply what they learn on nine ‘central’ days at Hartpury and as part of their virtual learning programme to improve and evaluate both their own performance and that of their horse.

Modules are focused on improving riding, horse management, tactical skills and fitness and nutrition as well as to support riders to manage their lifestyle and their career so that they are physically and mentally prepared to meet the challenges of top level competition.

Phil de Glanville, Hartpury’s director of elite sport, said: “It’s fantastic to see two of our AASE apprentices topping the National Championships and leading the way among up and coming eventing riders in the UK. And with Tintin joining us next year, the future of this unique programme looks very bright.

“These apprenticeships are generally seen as a stepping stone to prepare the best young riders for the world class performance programmes, teaching them the theory they need to succeed and accelerating their progress so they are ready to make that step-up.”

For more information about the Equine AASE apprenticeship run by Hartpury, e-mail Jennifer.mellows@hartpury.ac.uk or phil.De-glanville@hartpury.ac.uk 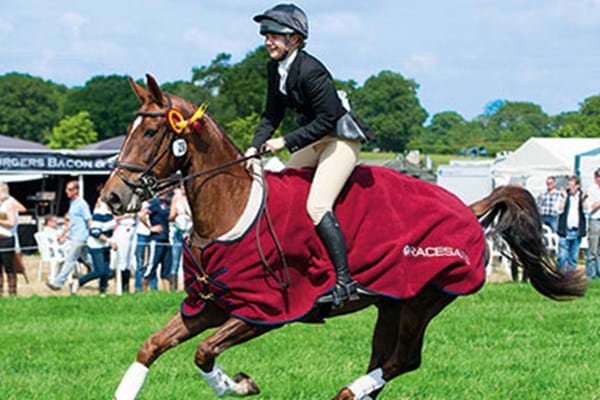