If ever you needed proof that taking a risk can pay off – just reflect on the story of Hartpury student and England and Gloucester flyer Jonny May.

When the winger was weighing up his future as a 16-year-old without any significant representative rugby honours to his name, he took the decision to rebel against the status quo. While his friends were staying on at Ridgeway School in Swindon to study A-levels, May headed to Hartpury to study a BTEC Diploma.

Playing mainly for Hartpury’s third team in his first year, he moved up to the seconds towards the end of the first season and later, handed a first team opportunity, he didn’t look back. In his second season, he secured two Twickenham triumphs – winning the BUCS national universities title and also the EDF Junior Vase with Hartpury RFC – as well as securing promotion with the latter as Gloucestershire Premier champions.

With his BTEC Diploma complete, another decision beckoned and just as May was ploughing through university prospectuses, the call came from the Cherry and Whites. Gloucester Rugby offered him an Academy contract and the rest, as they say, is history.

Developing at lightning fast speed into an outstanding rugby talent, Jonny has gone on to become a lynchpin of the Gloucester side and, inevitably, to catch England coach Stuart Lancaster’s eye – winning his first cap against Argentina in 2013 before going on to play every game of the 2014 RBS Six Nations campaign and then picked for the recent tour of New Zealand.

Throughout that time he has continued his studies at Hartpury, balancing a BA in Sports Business Management with his professional and international career as he looks to ensure he has a future beyond his sport.

“When I came to Hartpury, I hadn’t achieved much rugby-wise at all; county B squad at best,” said Jonny, who is now 24 and also plays at outside centre and full-back.

“I improved massively while I was at college and winning those two finals at Twickenham with Hartpury was incredible. We barely lost a game that season, it was a really special time and my performances put me on Gloucester’s radar.

“If I hadn’t come to Hartpury, I honestly don’t think I’d be where I am now. It was a risk at the time, doing a BTEC instead of A-levels, being the only person from my school to come to Hartpury and living away from home, but it has paid off massively for me.

“Being part of the Academy in 2008-09 meant we only trained in the mornings and I was able to pass all the modules on my Foundation degree that first year. It was trickier the next year though as I moved into the first team squad. I was also on loan at Moseley in the Championship and playing for them, as well as representing England Under-20s, Hartpury RFC and Gloucester in the A League. There just weren’t enough hours in the day so it took me another two years to complete my Foundation degree.

“I then moved on to the full degree and, thanks to the support of the lecturers and the coaching staff here, especially Gill Reindl (Principal Lecturer, Employability) I should only have my dissertation and one module to go after I’ve caught up with some work this summer.

“I’m not able to get to that many lectures but my tutors always make time for me and arrange tutorials when I need them. They understand that it’s tough for me to balance my studies with my playing commitments, but the flexibility and support I receive is helping me to get a degree and ensure I have something to fall back on when I’ve finished playing.”

Four weeks into the summer break, May is using his time wisely. He’s already fitted in a holiday to Cyprus around the weddings of two of his Gloucester and England team-mates – Billy Twelvetrees and Charlie Sharples – and is now focusing on resting and recovery, particularly as he’s determined to address the chronic tendonitis in his foot before the new season starts.

He was carrying the minor injury as he played in the topsy-turvy first Test against New Zealand, which ended in a 20-15 defeat as the All Blacks snatched victory with a last minute try, but knowing that rest was around the corner, he played through it and doesn’t feel it impacted on his performance.

“It was a long season with the end being particularly intense, so my body definitely needs rest to get back to being 100%,” he added.

“Looking back, it was a great season for me but I definitely have more to give, for Gloucester and for England. I know what I need to work on and I’m determined to be even better this year.

“We went into that first Test against New Zealand as massive underdogs, missing all the boys playing in the Premiership final, but we did really well. We were kicking ourselves a bit because we had the opportunity to beat them in the first and second Test and those opportunities don’t come along very often against a team like New Zealand.

“We may have lost the series 3-0 but we’ll take a huge amount from it. We know they are not invincible and the fact we ran them so close twice will give our young team a lot of confidence.

“I was a little disappointed to only play in the first Test but the coaches were clear that it wasn’t a case of being dropped, it was a case of needing to see what others could do. They wanted to look at Manu (Tuilagi) and Ashy (Chris Ashton) on the wing.

“Come Autumn, they will pick on form and I’m feeling positive about my rugby and the progress I made. I pushed hard to get my starting place and I played six games in a row for England.

“When you’re away on tour with a group of boys for four weeks in New Zealand, you get really close. It’s like having a second club and I feel like a valued member of the squad now, but I still feel I haven’t shown my best yet. The kind of person I am, I want more.”

The same could certainly be said of May’s former Hartpury colleague, Wales winger Alex Cuthbert, who has also enjoyed a spectacular rise through the rugby ranks.

While May was starring for Hartpury’s first team, Cuthbert developed later as a rugby player as he juggled a number of other sporting commitments and he mainly plied his trade in the second and third teams at the college. The pair, who were born only four days apart, were firm friends though and they have kept tabs on each other’s careers since.

Then, on March 9th, 2014, the former Hartpury team-mates got the chance to go head to head for their countries in a hotly-anticipated face-off as Wales tackled England in the RBS Six Nations at the Millennium Stadium. And it was May who claimed the bragging rights as England triumphed 29-18.

“While we only played a few RFC games together, I played a lot of Sevens rugby with Alex and we were good mates,” said May.

“We exchanged a few texts before the game and we swapped shirts. Of course, your history together doesn’t even come into your mind when you’re playing but after the game, you just go back to being old friends.

“Alex is a world-class winger and it’s great that we’re both part of the Hartpury success story. More players than ever coming through the Hartpury programmes are securing professional contracts and it’s great to see so many of them joining the Gloucester squads again this year. If anything, it seems to be accelerating.

“I always take an interest in how Hartpury are getting on and ask the boys in the academy for updates. They are in the best possible place to move their rugby on to the next level – I’m proof of that.” 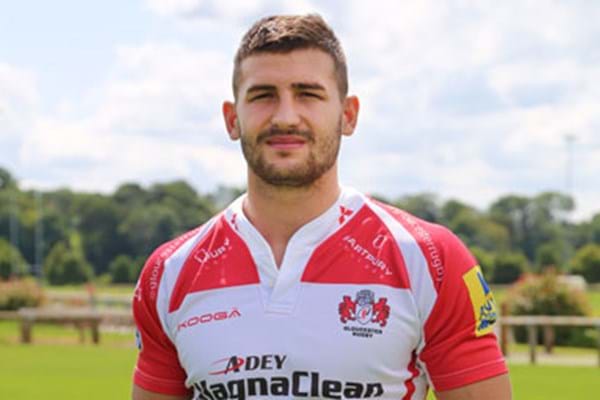