Up and coming dressage star Olivia Oakeley cemented her place as one of Europe’s top riders after finishing the Young Rider European Championships with three personal bests.

Oakeley, 21, a former A-level student at Hartpury College, along with horse Rio, achieved her best ever scores in the team test, individual and freestyle events on her way to a top 10 finish at the prestigious championships recently held in Arezzo, Italy.

The Great Britain rider scored 71.158 on her way to a seventh place finish in the team test, before improving twice, first with a 73.079 and then a 74.700 as she secured fifth and sixth place finishes in the individual and freestyle tests respectively.

Her scores placed her as the top British rider at the event and also confirmed her position as the seventh best young dressage rider in Europe.

Olivia said: “I’m over the moon with how the championships went. I left with the aim of getting three personal bests and getting into the top 10 and to come back having actually achieved that has made my year.

“Rio and I have built such a great relationship and for that to be rewarded with those scores is one of the best feelings I’ve experienced.

“I’m so grateful to everyone who has supported us along this journey, including the fantastic training I received from Carl Hester and Nick Burton as part of the equine academy at Hartpury. Without that, we wouldn’t have achieved the success we have.”

Nick Burton, who taught Olivia as part of the equine academy at Hartpury, said: “Olivia always showed huge potential during her time at Hartpury and she is continuing to prove that potential. To be selected for five consecutive European Championships at junior and young rider level is already an outstanding achievement but to finish as the top British rider and well inside the top 10 riders in Europe is amazing.

“It’s well deserved and a testament to her hard work and how much she developed during her time with us here at Hartpury. Of course, everyone here at the college continues to keep a close eye on her progress and celebrate her successes.”

Olivia and her horse have already had an excellent season after already finishing up as the top British Young Rider combination in all three tests at the Saumur CDIO in France, where they also picked up a team bronze medal.

The pair also finished just behind Spencer Wilton and Henrietta Andersen in the prestigious Somerford Park Premier League, where they competed in the Prix St George class, securing third place with a score of 70.96%. 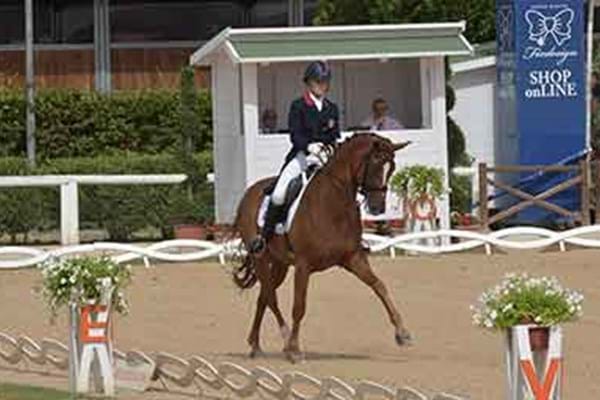