The Englishman, who won silver medal in the team discipline at both the Athens and London Olympic Games, will head into the final day of action for CIC3* riders knowing that a positive performance in both the cross country and show jumping elements will see him claim first place.

Later in the day, Burton hit back with another excellent ride, this time with Tempranillo, as he scored 37.3, cutting Fox-Pitt’s lead down to just over two points. New Zealand rider Tim Price sits in third position, after achieving a score of 41.7 with Wesko.

There was further good news for Burton, whose score of 35.7 in the Optimum CCI* on the first day of the event remained at the top of the leaderboard, despite the best efforts of the riders who competed today.

In the penultimate run of the day, New Zealand rider Lucy Jackson performed brilliantly with Corazon to score 37.8 and put herself in second place, halving the advantage that Burton held at the beginning of the day. French rider Nicolas Touzaint, with Tzinga d’Auzay, is in third position.

The CCI* competition take on the cross country course tomorrow, with the event ending with show jumping on Sunday.

Elsewhere, in the Magic CCI2*, New Zealand rider Jonathan Paget, riding Clifton Signature, dazzled the judges to take top spot with a score of 42.4. He replaced fellow Kiwi Jonelle Price at the top of the leaderboard, and both riders will be looking to capitalise on their dressage scores by performing well in the cross country stage tomorrow.

Rosie Scott-Ward, Hartpury Equine Director, said: “It has been another fabulous day, and all three competitions are close heading into tomorrow’s spectacle. This weekend is shaping up to be extremely intriguing, with many riders still in contention to win their respective competitions.”

Tickets for the event cost £10 tomorrow and Sunday and further information can be found at http://equineevents.hartpury.ac.uk/equine/eventing/home.html 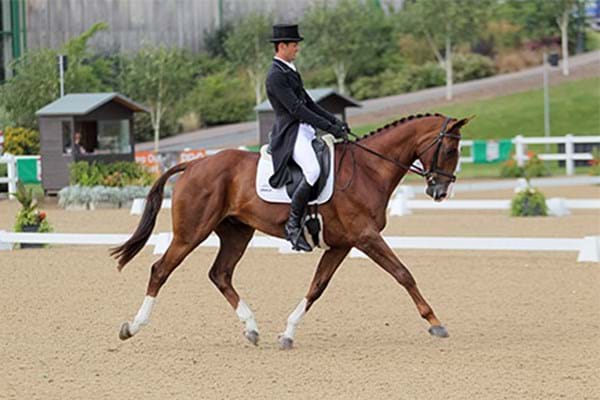