Hartpury’s Jess Newson helped Great Britain to their only gold in France as the national team finished runners-up at the recent Coupe de la Juenesse.

The 18-year-old’s quad, which included fellow rowers Emily Richards, Erica Holmes and Rosalind Wilson, led from the front as they saw off Spain by two seconds to secure Great Britain’s only gold medal of the weekend.

Hartpury’s rowing coach, Tom Pattichis, said: “It’s great to see one of our students win a gold medal, especially in an international competition. Every one of our rowers on display this weekend performed really well and it’s testament to their hard work throughout the year that they were here, competing for their country.”

Jess was joined by fellow Hartpury rowers, Alice Bowyer – who finished fifth in the girls' double on both Saturday and Sunday – and Jack Williams, whose boys' quad finished eighth on Saturday and 10th on Sunday. Jess’ women’s quad could unfortunately not replicate their form on the Sunday as they finished just outside the medals in fourth.

This year’s event was held in Libourne, France and bought together some of the competing nations’ most exciting Under-18s rowers to race across the 2000 metres stretch.
The win helped Great Britain to a second place overall finish as the rest of the crews helped to bring home two silver and nine bronze medals over the three-day event.

Fellow Gloucester-Hartpury rowers, Flo Pickles and Charlotte Hodgkins-Byrne, are currently in Hamburg gearing up for the Junior World Championships, with racing getting underway from Thursday, 7th August. 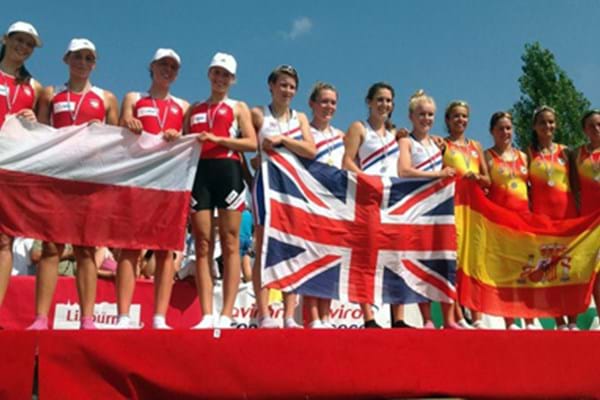