Gloucester-Hartpury duo Flo Pickles and Charlotte Hodgkins-Byrne rounded off their season in style by taking bronze for Great Britain at their first Junior World Championships.

The duo, both 17, were joined by Anna Thornton and Susannah Duncan in the quadruple scull as they rowed their way to Great Britain’s third medal of the championships.

The crew pulled away from fourth and fifth placed Romania and the Netherlands just after the halfway stage to come home in 7:41.08, a full ten seconds ahead of their closest challengers.

The quartet were coached by Hartpury’s own Tom Pattichis, who runs the successful rowing start programme at the college. He said, “This was an excellent result given the strength of the teams in who made it through to the final. To win a medal for your country is special and I know that Charlotte and Flo have worked extremely hard all season to get this far, whilst Anna and Susannah have done equally well this weekend.”

Flo and Charlotte have already tasted a huge amount of success this season after being part of the successful Gloucester-Hartpury quad which scooped the college’s first ever title at rowing’s blue riband event, Henley Royal Regatta, in July.

The bronze medal won by the duo also follows on from the gold picked up at last week’s Coupe de le Jeunesse by Hartpury’s Jess Newson. 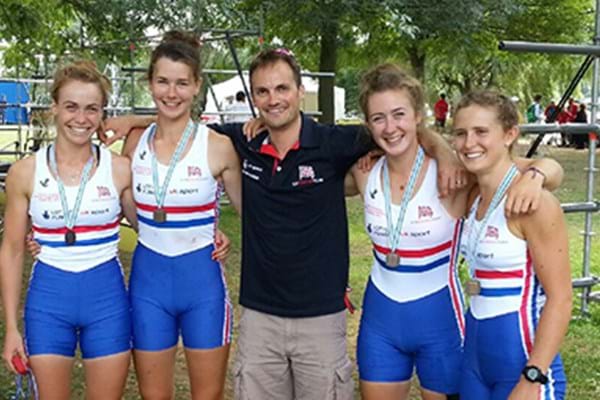