Given the dry conditions, this might have been a day for Hartpury’s speedy backs, but instead this was a result built around a dominant performance from the pack.

Both sides needed the win from this game – Hartpury to shrug off any hangover from the Richmond mauling and Macclesfield simply to get points on the board after three straight defeats.

Following a slightly frantic opening, in which both outside halves exchanged penalties, the Hartpury forwards started to build control. Macclesfield, hindered by the early loss of Number 8 Francis Barker were soon creaking, particularly at the scrum.

Thompson gave Hartpury a 6-3 lead after 18 minutes, with a second penalty, and four minutes later was able to dart over for the first try. A series of punishing drives from the visiting pack, with props Des Merry and Tim Brockett prominent, eventually shattered the Macclesfield defence and Thompson was over untouched.

He slotted the conversion, and almost had the chance of another shortly after, when a typical Steph Reynolds run from deep outstripped the defence and saw him go over in the corner. Celebrations were stifled when it became clear that a foot in touch had been spotted, but the reprieve for the hosts was merely temporary.

From the line-out, Hartpury forward pressure led to a scrambled Macclesfield clearance. The kick failed to make touch and instead fell nicely for Thompson to feed Jaike Carter, who skipped past the cover to score.

Hartpury continued to press hard and their scrummage ascendancy was underlined four minutes before the break, when a ball taken against the head allowed centre George Boulton to crash through under the posts and produce a half time lead of 27-3.

Macclesfield were rocking at this stage, but showed much-needed resolve to tighten things up in the second half. Hartpury’s forwards remained in control, although a series of attacking line-outs bought only frustration until flanker Luke Stratford eventually barrelled over on 55 minutes (pictured).

The bonus point gained, Hartpury took the opportunity to empty their bench for the final quarter and needed to display some solid defence as the home side finally enjoyed a sustained period of possession.

There was no further scoring until two minutes from time, when Craig Jackson intercepted to race 60 yards to the posts. Tom Griffiths, moving up from Hartpury’s U18 side, marked his league debut by adding the conversion.

This emphatic win comes at a useful time for the College as they now look forward to two potentially challenging home games, with both visiting sides, Esher and Fylde, expected to be among the pace-setters in National League 1 this season. Macclesfield, meanwhile, will hope that they can resolve their injury issues and arrest their worrying start to the season.

Hartpury College would like to thank Macclesfield RUFC for their excellent hospitality and we look forward to renewing the acquaintance at the return fixture in January. 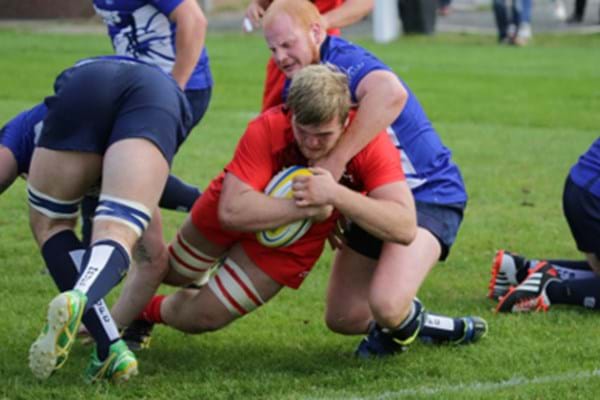